What’s that? You think that under those circumstances an oops wouldn’t be hard to get out? Not so, according to a disturbing study presented Monday at the annual meeting of the Pediatric Academic Societies in Vancouver. Researchers looked at vaccination rates both before and during an outbreak of whooping cough in Washington state in 2011 and 2012, and found that even as the disease was spreading and unvaccinated children were suffering, the percentage of parents who brought their 3- to 8-month olds in for their scheduled inoculations didn’t budge.

“We have always assumed that when the risk of catching a disease is high, people will accept a vaccine that is effective at preventing the disease,” said lead author Dr. Elizabeth Wolf of the University of Washington, in a statement that accompanied the release of the study. “Our results may challenge that assumption.”

That says something deeply troubling not just about the outlook for childrens’ health, but about human obtuseness, particularly as outbreaks of measles strike New York City, Orange County, Calif. and elsewhere, while mumps cases spread throughout Columbus, Ohio. Despite this real-time, real-world evidence of the damage caused by the anti-vaccine crazies—who have spent the better part of 16 years peddling the fable that vaccines are filled with never-fully-specified “toxins” that cause autism and an ever-changing pu pu platter of other imaginary ills—many parents and even some doctors continue to close their eyes.

That’s a problem not just for the unprotected kids, but for everyone. If we got smoking rates in the U.S. down to just 10% of the population, we’d celebrate that fact as a great public health victory. But as virologists and epidemiologists remind us again and again and again, when 10%—or even 5%—of parents opt out of vaccines for their kids or insist on making up their own vaccination schedule, they destroy the herd immunity effect that should protect the handful of people in any population who can’t get vaccinated for legitimate medical reasons. If a virus can’t find an entry point into a community, it can never make its way to the most vulnerable members. Every parent who opts out opens one more infectious avenue.

The U.S. is not alone in playing craps with vaccine-preventable diseases. The Vancouver report was issued on the same day that the World Health Organization (WHO) declared a public health emergency concerning the spread of polio from Pakistan, Syria and Cameroon, and the presence of the virus in Iraq, Afghanistan, Israel, Equatorial Guinea, Ethiopia, Somalia and Nigeria. The emergency did not arise because of some new, especially tenacious strain of polio. Indeed, the disease has been at the brink of eradication for a few years now, with only 160 endemic cases in three countries—Afghanistan, Pakistan and Nigeria—in 2013, and 257 cases in countries into which the virus was imported by carriers crossing the border. But attacks on medical field workers by militant groups in Pakistan have disrupted inoculation efforts there, and war or unrest in Syria and elsewhere have made the safe passage of vaccinators impossible.

Extremists in the Middle East and Africa are hardly motivated by the same ideas as rumor-mongers and frightened parents in the U.S. But both are committing the same moral crime, jeopardizing the health and welfare of blameless babies. It’s those babies who will pay the price—and the parents and extremists who must bear the blame. 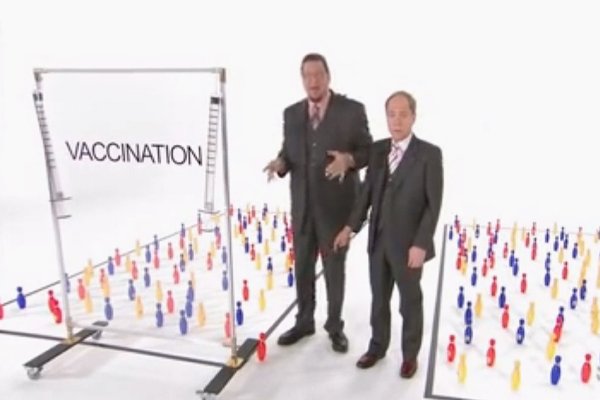 Penn and Teller Take On the Anti-Vaxxers
Next Up: Editor's Pick