Scientists Just Got the Lead Out of Solar Cells -- with Tin

A cross-section of the tin-based solar cell -- the perovskite layer, which looks a bit like granulated sugar, is in the middle.
Northwestern University
By Matt Peckham

Tin. Soldering. Tin cans. Pewter. Cat on a Hot Tin Roof. The Tin Man. A corrosion-resistant metal used to coat other metals. Probably not what you think about when someone mentions solar cells, much less a word like “perovskite.”

Perov-huh? (Don’t feel bad, I had to look it up, too.) The word comes from a nineteenth Russian mineralogist, one Count Lev Perovsky (Perovsky didn’t discover it, but Gustav Rose, who did, named it after the count), and describes a mineral composed mostly of calcium titanate, as well as any other mineral that has the same crystal structure. That structure is of interest to engineers, where its properties have uses in fields related to conductivity and magnetics. And in recent years, perovskites have become a focal point for researchers working with photovoltaics — the fancy way of describing the science of converting solar radiation to electricity.

Most solar cells today use crystalline silicon, where we’ve recently seen efficiency ratings — that is, the ratio of generated electricity to solar radiation received — up in the 40 percent range. Perovskites, by contrast, at this point have much lower efficiency ratings (lead perovskites, for instance, rate in the teens: around 15 percent), but tend to be less expensive. The downside in lead’s case is that you’re also talking about a highly poisonous and thus environmentally undesirable material.

But if you instead employ a tin-based perovskite, as researchers at Northwestern University just did — successfully and for the first time — you wind up with a low-cost, environmentally friendly, comparably efficient solar cell that researchers claim can be made without complex equipment or hazardous materials: a process loosely referred to as “bench” chemistry. The research appears in the May 4 issue of the peer-reviewed science journal Nature Photonics.

The team’s solid-state tin solar cell is built from five layers: the first is electricity-conducting glass — that’s where the sunlight first enters. Next, a layer of titanium dioxide (a material also found in sunscreen and UV blocking pigments) coats the glass and acts as a photocatalyst. Third, the tin perovskite is added to act as the light-absorbing agent.

The fourth layer involves an organic compound called pyridine and acts to seal the cell and close the electrical circuit (the selection of this compound was a bit of a trick, because the researchers had to find something that wouldn’t destroy the tin), and the fifth and final layer — the “back contact electrode” — is gold. All told, the researchers say the entire “sandwich” is between one and two microns thick (a micron is one-millionth of a meter; a strand of human hair by comparison averages about 100 microns in thickness).

“This is a breakthrough in taking the lead out of a very promising type of solar cell, called a perovskite,” said Mercouri G. Kanatzidis, an inorganic chemist at Northwestern who led the research. “Tin is a very viable material, and we have shown the material does work as an efficient solar cell.” What’s more, while current tests yield an efficiency rating of about 6 percent, the researchers believe tin perovskite “should be able to match — and possibly surpass” lead perovskite’s 15 percent efficiency rating.

“Other scientists will see what we have done and improve on our methods,” said Kanatzidis. “There is no reason this new material can’t reach an efficiency better than 15 percent, which is what the lead perovskite solar cell offers. Tin and lead are in the same group in the periodic table, so we expect similar results.”

Whether it amounts to a “next big thing in photovoltaics” is anyone’s guess, but assuming nothing knocks perovskites from their perch in the near term, and that their efficiency rating can ramp up to silicon levels, tin-based photovoltaic tech could turn out to be a pivot point on the road to environmentally preferable as well as more commercially viable solar cells. 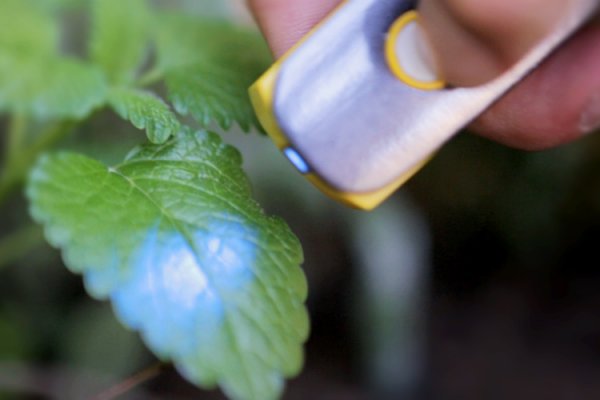 Scio Pocket Molecular Scanner Is a Google-like Device for Physical Objects
Next Up: Editor's Pick