A couple weeks ago I had a fascinating video call with a gentleman named Dror Sharon, the CEO of a company called Consumer Physics. He showed me a product called Scio that just went up on Kickstarter last Tuesday: a hand scanner that can scan physical objects and tell you about their chemical make up.

“Smartphones give us instant answers to questions like where to have dinner, what movie to see, and how to get from point A to point B, but when it comes to learning about what we interact with on a daily basis, we’re left in the dark,” Mr. Dror told me via Skype. “We designed Scio to empower explorers everywhere with new knowledge and to encourage them to join our mission of mapping the physical world.”

At first Scio will come with apps for analyzing food, medication and plants. You could, for instance, use it to refine the ingredients of your home-brewed beer or figure out if an Internet site’s cheap Viagra is fake. Later, the company will add the ability to check cosmetics, clothes, flora, soil, jewels, precious stones, leather, rubber, oils, plastics and even human tissue or bodily fluids.

Mr. Sharon told me, “The spectrometer figures out what the object is based on an infrared light that reflects back to the scanner. Most objects have different absorption rates as they vibrate at different levels on the molecular scale. The app takes the data and compares it to a cloud-based database of objects in a distant data center. When it gets a match, it sends the results to the user’s smartphone.”

According to Mr. Sharon, “The food app tells you calories, fats, carbohydrates, and proteins, based on your own estimate of the weight of the food you’re about to eat. (With many food packages, you can get the weight from the label). The app could tell dieters exactly how many calories they’re about to consume, while fitness apps can tell them how many calories they’re burning. That helps people figure out exactly how much exercise they need to do in order to burn off the food they’re eating.”

As I understand it, the food app can also gauge produce quality, ripeness, and spoilage for foods like cheeses, fruits, vegetables, sauces, salad dressings, cooking oils and more. It also analyzes moisture levels in plants and tells users when to water them. Mr. Sharon suggested that you could even be able to analyze your blood alcohol level one day, but Scio is not currently approved as a medical device.

What I find most interesting is that as users conduct more tests, the app gets better and better at correctly identifying objects. The more people use it, the richer the database of information will be, which will add to the precision levels of the Scio over time and, more importantly, expand what it can understand. In the demo I saw on an Android smartphone, a ring fills up with circles on your smartphone screen to deliver the proper info, and it takes a matter of seconds to recognize something. Scio has to be about 20 millimeters from an object before it can be used for scanning, and the scanner uses Bluetooth low energy (BLE) to connect with a smartphone, which in turn needs to be running either iOS 5 or Android 4.3 or higher.

He also showed me its ability to scan what looked like a unmarked white pill. Scio correctly identified the chemical makeup of the pill as aspirin and even showed that it was made by Bayer. These are the first types of categories of physical products Scio will target, but eventually it could identify the chemical makeup of just about any object. That is why he likened it to being “Google for physical objects.”

If you are a fan of police procedural TV shows like CSI or NCIS, you already know about things like mass spectrometers and other professional machines that analyze the chemical makeup of objects. These machines can be very large. Although there are some handheld versions available today, they’re all pretty expensive. Scio aims to do similar tasks with a device that can fit into your pocket. And when it ships, it will cost considerably less than professional solutions — as low as $149. Now, I am not suggesting that Scio is as powerful as professional mass spectrometers. However, from what I saw in the demo, it can do similar types of chemical analysis and do it pretty quickly, with the readout showing up on your smartphone.

While I find the idea of a pocket spectrometer interesting, where this could have real impact is if it could be built straight into a smartphone. According to Mr. Sharon, this is ultimately where he sees his technology going. His initial focus is on food, medication and plants, although over time, it could be expanded to cover just about any physical object. Imagine being able to point the scanner in a smartphone at an apple and know exactly how many calories were in it based on its weight. Or if you had a stray pill lying around and you wanted to know what it was before you dare ingested it.

I see this particular device as a game-changer of sorts. Today, all of our searches are being done via text, numbers and through structural databases of some type. But with a consumer-based spectrometer initially designed as a pocketable device that could eventually be built into smartphones, gaining a better understanding of the make up of the physical objects we come into contact with each day would vastly expand a person’s knowledge base. I could imagine it as being part of a set of teaching tools to perhaps get more kids interested in science. Or it could be used in a science-related game as an important tool used to solve a puzzle. At the other extreme, its impact on health-based problems and solutions could be enormous.

This is a technology to watch. As Scio gets smarter as more people use it — and perhaps someday finds its way directly into smartphones — it would add a new dimension to our understanding of the world around us. It could become an important means for connecting us to our physical world in ways we just can’t do today. 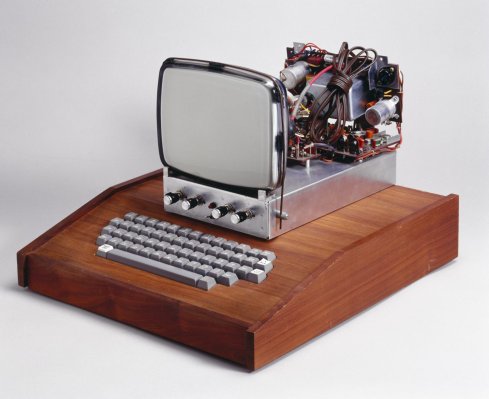 Still in the Making: Don't Wait for Tech History to Repeat Itself
Next Up: Editor's Pick