Six of the nominees, including The Wolf of Wall Street, are keeping it real

It’s the phrase you hear every year at the Academy Awards: “And the Oscar goes to …” But at this year’s March 2 ceremony, there’s another refrain that’ll be getting plenty of attention: “Based on a true story.”

Six of the nine nominees for Best Picture are about real people and real events: American Hustle, Captain Phillips, Dallas Buyers Club, Philomena, 12 Years a Slave and The Wolf of Wall Street. Hollywood has always loved fiction that’s not entirely fictional, from 1928’s The Patriot to now classics like 1962’s Lawrence of Arabia to last year’s winner Argo–but this year’s race takes the truism to a new level. Even going back to the first awards in 1927, there’s never been another year in which two-thirds of the films in the race were reality-based.

Leonardo DiCaprio, a Best Actor nominee for his turn as rogue stockbroker Jordan Belfort in The Wolf of Wall Street, traces the trend to contemporary moviegoers who make an immediate connection when they know a story is based in reality. “Even though a writer can invent something amazing, there’s always that notion that real life produces events that are more incredible than our imagination,” he tells TIME. “When an audience knows that at least part of the story actually happened, they really respond.” Which is why DiCaprio spent months hanging out with Belfort in preparation for the part. “I cannot tell you how much easier it is for an actor to be able to spend time with that person,” he says. “You can go so much deeper into who they are, even though in the end you are going to turn them into a character.”

It’s the second time DiCaprio has worked on a true story with director Martin Scorsese; the first was The Aviator, for which he had to do more guesswork and research–including living with someone suffering from obsessive-compulsive disorder–before playing Howard Hughes. Not to mention his earlier takes on real-life figures, such as writer Jim Carroll in The Basketball Diaries (1995) and J. Edgar Hoover in Clint Eastwood’s 2011 biopic. True stories have produced such good material for DiCaprio that he and his Wolf co-star, Best Supporting Actor nominee Jonah Hill, have teamed up to work on a film based on Marie Brenner’s 1997 Vanity Fair article “American Nightmare: The Ballad of Richard Jewell,” about the aftermath of false allegations that the security guard bombed Atlanta’s Summer Olympics.

The appeal of “based on a true story” is more than just an actor’s intuition. Rick Busselle, who studies media psychology at Bowling Green State University, says that knowing a story isn’t fantasy means you can’t dismiss it, so “the audience finds the less extraordinary events of real life more compelling than the extra-extra-extraordinary events of fiction.”

Why has this year yielded such a bumper crop of truth? Busselle hazards a guess: “Is part of it that, frankly, we’re running out of good fiction ideas?” There’s no way to test the theory, but anecdotal evidence is strong. Between franchises, remakes and history, there are few truly new stories in multiplexes these days. Factor in reality television and YouTube’s wealth of DIY docs, and it would be easy to despair about the future of good old-fashioned imagination.

The movie industry wouldn’t have reason to complain. Reality-based films have long done well at the Oscars. “Studios like to make money, and they like to win Oscars. Making big franchise pictures makes you money, and making true stories wins you Oscars,” says movie-biz analyst Doug Creutz of Cowen & Co. “I think it’s as simple as that.” These things fluctuate, but the general trend is upward. Early Best Picture winners tended to be inventions; since 1970 and Patton, a dozen true-story movies have taken home the prize.

But fear not, fantasizers: historicity doesn’t mean the end of creativity. In Hollywood, reality is relative. The zone where the audience knows that something happened, just not exactly what, is where Oscar-worthy magic happens. Take The Wolf of Wall Street: “Not everybody knows the story of [brokerage firm] Stratton Oakmont, but everyone’s aware of the shenanigans of Wall Street,” says Creutz. And that balancing act–you know context, not details–allows filmmakers to take liberties with history. Here’s how this year’s Best Picture nominees did just that:

The Wolf of Wall Street. Believe it or not, Wolf sticks pretty close to actual events, at least if you accept the outrageous memoir on which it’s based. That lets it perfectly strike a note of “You knew it was bad, but you won’t believe just how bad.” The real Jordan Belfort, who has a brief cameo at the end of the film, scammed his way into millions and engaged in seemingly endless bouts of debauchery. It’s not only the pump-and-dump stock scheme that’s in his book but also the dwarf tossing and yacht sinking. The story, meanwhile, continues beyond the film: the U.S. attorney’s office and Belfort’s real-life victims have renewed their restitution efforts.

American Hustle. Director David O. Russell’s film twists the true-story genre, even subbing “Some of this actually happened” for the usual opening-title card and creating characters (played by nominees Christian Bale, Amy Adams, Bradley Cooper and Jennifer Lawrence) who are largely fictitious or only loosely based on the real players. Still, the crazy story of a con artist who helps the FBI nab corrupt politicians is even crazier given that the 1970s FBI operation known as Abscam really happened. The cultural touchstones of the era did too–you couldn’t make up those hairdos if you tried.

Captain Phillips. Tom Hanks plays shipping captain Richard Phillips, whose vessel was boarded by Somali pirates in 2009–an attack that led to his capture and dramatic rescue. The practical-minded captain really did attempt to deter his eventual captors by faking a call to the Navy and later trying to swim away. Director Paul Greengrass and screenwriter Billy Ray take poetic license on the emotional side: Hanks’ Phillips and the Somali pirates who capture him (led by Best Supporting Actor nominee Barkhad Abdi) develop the kind of rapport that doesn’t happen when you’re not just pretending to be kidnapped by pirates.

Dallas Buyers Club. After being diagnosed with HIV in the mid-’80s, Texan Ron Woodroof launched a buyers’ club to provide American AIDS patients with drugs that had not yet been approved by the FDA. Matthew McConaughey, who scored a Best Actor nod for the part, cowboyed up the role with rodeo-friendly details that weren’t there in Woodroof’s life. His co-stars, including Best Supporting Actor nominee Jared Leto, play people who are composites. Still, the movie’s depiction of the club is fairly accurate. Woodroof really used disguises, like a priest’s outfit, to sneak drugs across the border–and he wasn’t the only one. The Dallas Buyer’s Club (when it’s not a movie, it gets an apostrophe) was one of many such groups in the years before an effective treatment was found and approved.

Philomena. Pregnant out of wedlock in the 1950s, Philomena Lee, played by Best Actress nominee Judi Dench, was sent to an Irish convent. Her baby was taken for adoption against her wishes, and nuns refused to give her any information about him–until journalist Martin Sixsmith decided to help her investigate the child’s whereabouts in hopes of producing an article. Sixsmith ended up writing the book on which the movie is based, and the movie follows the story closely, except that some of the movie nuns are slightly more sinister than they were in Lee’s life. Earlier this month, Lee met Pope Francis; she’s using publicity from the movie to get signatures on a petition that encourages the Church in Ireland to make public information about such adoptions.

12 Years a Slave. Director Steve McQueen’s film is based on an 1853 memoir of the same name, almost: the real Solomon Northup, played by Best Actor nominee Chiwetel Ejiofor, spelled out the word twelve. As in the movie, Northup was a free man who was kidnapped and sold into slavery, there to remain until his rescue more than a decade later. Some details are massaged for the film, but the most horrific scenes–like when Northup is forced to whip Patsey, played by Best Supporting Actress nominee Lupita Nyong’o–come straight from the text.

Gruesome scenes like that speak to Creutz’s point about the power of a story with a well-known framework and fresh details. We know that slavery happened–as did financial malfeasance, ’70s scams, the advent of AIDS and latter-day pirate attacks–but films worthy of a Best Picture nomination make us feel that history in a new and not always comfortable way.

That said, It won’t necessarily matter on Oscar night whether the Best Picture winner is true, based on truth or entirely made up. Audiences don’t fact-check films as they’re watching; they paid good money to be entertained. “There’s no motivation in the movie theater to pick it apart,” Busselle says, noting that as long as a film is consistent within the rules of the world it creates, viewers will go just about anywhere with a talented director and cast. Otherwise, nobody would be interested in seeing Superman fly or hobbits chase after dragons and enchanted rings.

So the current Best Picture contenders that lack history’s stamp of approval aren’t necessarily out of luck. The three remaining nominees tell stories with varying levels of connection to reality–from her’s human-software love story to Gravity’s outer-space misadventure to Nebraska’s tightly focused family drama–but they’re all as realistic as we allow them to be.

–WITH REPORTING BY ELIANA DOCKTERMAN 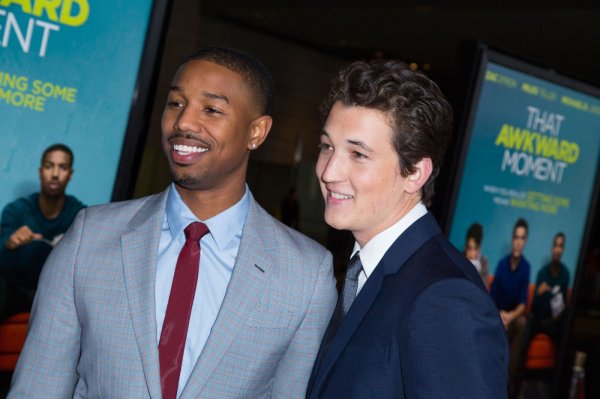 The New Fantastic Four Has Found Its Superheroes
Next Up: Editor's Pick