As you describe it in Handbook for an Unpredictable Life, your childhood was grim. What made you write about it?

Honestly, I’m still trying to figure that out. I just felt like I was supposed to, and after I started, it kind of became, Oh no, I can’t stop it now.

Why did your mother take you from the care of a loving aunt and put you in a Catholic home when you were 2 years old?

I don’t know. She suffered from severe mental illness, so only she knows, and she’s not around, God rest her soul. I’ve tried for many years to figure it out, and there’s just no logical answer. Her behavior wasn’t just intense. It was nonsensical and at times erratic and at times extremely loving. It ran the gamut.

When she got pregnant, your dad realized she was unstable and went back to his wife. Why are you so forgiving of him? He didn’t take you from the home.

That’s a very good question. Maybe it’s because we look so alike. Maybe because of his drunken confession that he was my father when a lot of people weren’t bringing the truth into my life. And the man had undeniable charm.

How did you deal with the PTSD diagnosis you got from your childhood experiences?

At first, being diagnosed sucked. I wanted to believe that I was above all that had gone down. When a doctor said, “No, you have PTSD,” I was like, “Oh, I’m human.” It was like a weight was lifted off me. I still have minor episodes. I get scared very easily. If I’m at home and you walk into the room unannounced, I completely overreact.

You fell out with Spike Lee and Jennifer Lopez after working with them. Do you ever wonder if it’s you?

I feel like I got to that point in this book. It was kind of a confession, taking ownership. When I think back on the first rehearsal date of Do the Right Thing, I’m so embarrassed by my behavior. I was so aloof. Pure PTSD, but I didn’t know it back then. And in regards to Jennifer, I think we were both guilty and we were both young and silly. I was way over the top. It took me a minute to realize that I was still fighting in that old way.

You were in a lot of fights in your youth. Do you think you could still hold your own?

I think push come to shove, I could get a few licks in. But I hated fighting. Getting punched in the face is the worst feeling ever.

Yet you love boxing.

Boxing is about pushing through your fears. It’s more about fighting yourself. Floyd Mayweather could get punched, like, clean shot down the middle to his face, and he wouldn’t flinch. And I understand what he’s doing. It’s part of the craft. It’s how you can take a blow. To me, boxing personifies my life.

Your voice–a net negative or a net asset?

Asset. People gave me so much crap about my voice, and I tried, I really did try [to change], but it was the way I spoke. And as I got older the octaves dropped, thank God. Now I find it flattering if a 16-year-old comes up and starts imitating me.

Successful Latinas sometimes get criticism from their community. Was that true for you?

Most of the criticism I got early in my career was from the Latin community. They used to take me out to lunch and tell me, “Can you go and take lessons to lessen your accent?” Or “When you’re on a talk show, can you not be so funny and loud?” [The criticism leveled at] Sofia Vergara right now is not right. It’s not fair.

Last election you made a campaign video, and you’re an educational activist. Would you ever want a political career?

I am on the presidential council for HIV and AIDS with wonderful people. But the bureaucracy is tough. I don’t know if I have the patience not to curse somebody out.

Could you still do the moves from the opening of Do the Right Thing?

I could, but I’d probably be in the emergency room afterwards. 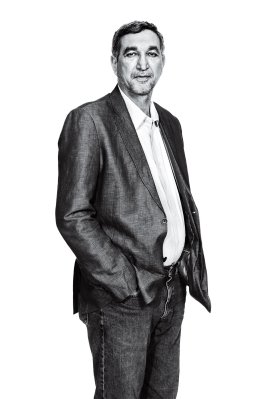 10 Questions with 'Johnny Walker'
Next Up: Editor's Pick