Time to Put Trade Above Politics

We live in a world without war or even significant conflict among the major powers. We also live in an age of economic growth. All of this seems normal, but in fact, it isn’t. The current global system of commerce and collaboration instead of war and competition is historically rare. Will it last?

The answer depends largely on Asia, which within 10 years will be home to three of the world’s four largest economies. There are two possible scenarios. The first is that Asian countries will embrace the open, rule-based free-trade system in place today and deepen it. The second is that as these countries grow rich, they will become more nationalist, focus on narrow interests, pursue mercantilism and thus erode if not destroy what some in those countries describe as the “Western international order.”

This is not a theoretical debate; a great game is afoot in Asia. The U.S. wants to strengthen the forces of openness, rules and free trade by concluding an ambitious trade agreement with many Asian countries, the Trans-Pacific Partnership (TPP). China, on the other hand, is proposing the Regional Comprehensive Economic Partnership, a more mercantilist deal for Asian countries. It asks very little of these countries in terms of commitment to real market-based reforms or to environmental and labor standards. It offers them greater access to China as a gift from Beijing. This might advance China’s narrow interests, but it does little for an open, rule-based regional order.

Most Asian countries will naturally sign up to expand into the Chinese market. But they are willing to make painful concessions to sign up for America’s vision of the region. Japan’s Prime Minister, Shinzo Abe, told me recently that he was willing to take on some of his country’s most protected sectors as part of the TPP. But it’s in the U.S. that the American vision has become more cloudy. Congressional Democrats have virtually abandoned free trade, and Republicans balk at supporting President Obama.

The economic reason for Washington to support both the TPP and another ambitious trade agreement with European countries, the Transatlantic Trade and Investment Partnership, is obvious. The U.S. market is already wide open. Last year, 68% of the value of goods entered duty-free. The rest came in at an average tariff of 4.4%. Any agreement will require other countries to make many more concessions than the U.S. simply because their markets remain much more closed. And both trade deals open up markets in other tough areas, like intellectual property, state-owned companies and what are called nontariff barriers (regulations that have the effect of protecting inefficient local industries).

Even in deadlocked Washington, there is a path forward. Republican Congressional leadership remains committed to free trade. Former GOP officials like Robert Zoellick have made a persuasive case for why the party should strongly support both deals. Democratic opposition is not quite as devastating as it appears at first glance. Harry Reid, for example, voted against all three recent trade agreements, but did not obstruct their passage. The number of House Democrats who voted for these deals ranged from 31 to 66; garnering such a range again might still be possible.

Still, the democratic party’s retreat on free trade over the past two decades has been utterly dispiriting and totally at odds with its claim to be modern, future-oriented and open. It’s also at odds with the party’s history. There is FDR nostalgia among Democrats these days as they consider how he battled a depression, created the social safety net and made assertive government admirable. But Democrats forget another crucial element of his legacy: free trade. In a smart essay for the Council on Foreign Relations, Douglas A. Irwin points out that the “fast track” authority–empowering the President to negotiate trade deals–that Reid and Nancy Pelosi oppose was created by the Roosevelt Administration in 1934. FDR and Secretary of State Cordell Hull knew that free trade helps produce not just prosperity but also peace. In fact, free trade was one of Woodrow Wilson’s 14 Points to remedy the mistakes that led to World War I.

Free trade has always required an assertion of the national interest over special interests. Harry Truman vetoed a bill that tried to kill the nascent world trading system. John Kennedy took on domestic producers who feared foreign competition as he expanded that system substantially. And Bill Clinton heroically took on his party’s opposition to NAFTA and turned much of it around.

President Obama will have to spend real political capital, take his case to the country, push his party and work with Republicans. But if he does, history tells us that he–and the U.S. and the world–will win.

TO READ MORE BY FAREED, GO TO time.com/zakaria 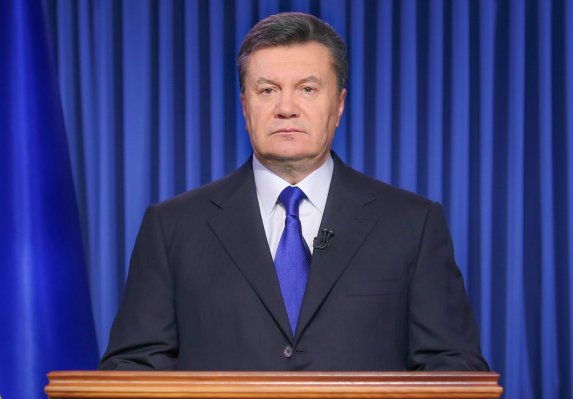 Ukrainian President's Allies Start to Abandon Him
Next Up: Editor's Pick