More than two decades after photojournalist Ed Kashi documented Kurdish refugees streaming back from Iran and Turkey to their fractured homeland, he returned to the same patch of land to witness the impact of Syria’s unending civil war on what is being called a Lost Generation.

The plight of Syria’s youngest in the midst of that civil war is often overlooked, when not hidden in plain sight. At least 7,000 of the 130,000 estimated deaths since 2011 are thought to be children — dead too soon but, at least, spared some of the hardships now plaguing more than 1 million Syrian youth living beyond their native borders: hunger; disease; little to no education; flashbacks or nightmares sparked by the sights and sounds of warfare; depression.

As the unimaginably brutal conflict ends its third year, Kashi and Julie Winokur, who co-founded Talking Eyes Media, collaborated on a husband-wife project to highlight the emotional toll the war is taking on the youngest of those driven from their own country. Kashi spent two weeks in northern Iraq and Jordan last November, in coordination with the International Medical Corps, and met with Syrian teenagers (and their families) profoundly rattled by the collapse of their old world and their new, unsettled life as refugees.

One of them was Jihan, a 16-year-old who has lived in the Domiz refugee camp near Dohuk, Iraq, for more than a year. The surreality of her situation—like many exiled Syrians, Jihan’s middle-class family now calls a cold, dark tent in a foreign land home—and the pain of leaving others behind has changed Jihan, perhaps irreparably.

“You have a young woman who became an activist as a teenager back in Damascus and who was upset with her father for leaving. She felt she should have died a martyr there rather than leave everyone,” Winokur says. Jihan is articulate, open to discussing her and her family’s struggles and eager to use the platform Kashi and Winokur provide to draw attention to what she and others are going through. Still, her anguish is clear.

Everyone handles it differently: some accept their displacement as Fate; others, like Jihan, have real trouble accepting their status as refugees. Winokur says she latched onto Jihan immediately upon seeing her interview, among several filmed by Kashi, as well as Muna, another 16-year-old girl who, with several family members, lives in a tent in the Jordanian desert. With their testimony, she stitched together an intensely personal account of what has become a universal experience for young female refugees—a struggle that, among other challenges, includes caring for siblings and threats of sexual assault.

Kashi and Winokur hope to update the story every six months, but it’s a matter of funding rather than one of will. “What do these kids grow up to be?” Kashi asks. “Because we need to care about that if we want to stop the cycle, and if we want to have any impact on the cycle. You just have the sense that this is not going to end any time soon.”

Whenever that happens—after the current Syria talks in Switzerland or well into the future—it’s the children who will watch the pieces of their homeland be put together again, and it’s they and their own children who will have to live with however those pieces are arranged.

This documentary was produced in conjunction with the International Medical Corps, a humanitarian non-profit organization that provides relief to people affected by conflict and natural disaster. 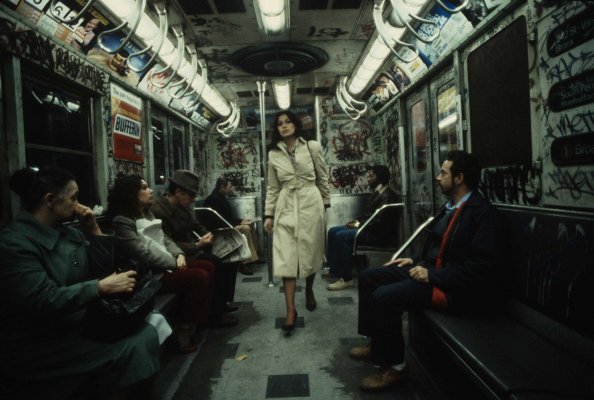 Grit, Grime and Graffiti: Christopher Morris on the New York Subway, 1981
Next Up: Editor's Pick