Former U.S. Ambassador to Moscow Warns of War in Ukraine

A protester walks past a burning pro-Russian tent camp near the trade union building in Odessa May 2, 2014.
Stringer—Reuters
By Michael Crowley

Michael McFaul, who served as President Obama’s ambassador to Moscow until February, has warned that the Ukraine crisis is approaching a state of war that could trigger a large scale invasion by Russian military forces.

“The last 24 hours was a major escalation,” McFaul told TIME in a Friday interview, as Ukraine’s military began an operation to reclaim eastern cities and towns taken over by pro-Russia militants. The offensive has led to violence, including reports that Ukrainian helicopters were shot down by pro-Russian forces. Brewing violence in the southern port city of Odessa also claimed dozens of lives Friday.

Amid reports that pro-Russian separatists in eastern Ukraine are urging Russia’s military to intervene on their behalf, McFaul says he’s now reconsidering the widely-shared assumption that Russian President Vladimir Putin would prefer to destabilize Ukraine from a distance, without staging a cross-border invasion that would compel the west to take new retaliatory steps, possibly including arming the Ukrainian military.

“It would be very costly for Russia to invade Ukraine,” McFaul said. “It’ll be real fight — maybe guerrilla warfare for years. That’s not something one does lightly. But it got a lot more likely in the last 12 hours.”

Russia’s parliament has authorized Putin to intervene in Ukraine, though Putin said last month “I very much hope that I will not have to exercise this right.”

But many experts fear the rising violence may provide Putin with an excuse, even if it brings a harsh western response. “It would be a very foolish move on Russia’s part,” says Olga Oliker, an international security and defense policy analyst at the Rand Corporation. “However that does not mean that it can be ruled out.”

The chaos deepened on Saturday as the Ukrainian military continued to press its offensive. The pro-Kremlin news outlet RT alleged on Saturday that residents in the eastern city of Kramatorsk chased off Ukrainian military forces with chants of “fascists.” In one bright spot, however, a team of international observers held for days by pro-Russian forces were released unharmed.

But the larger picture remains bleak. The events of the past couple of days, McFaul said, “make me more worried than ever before.” 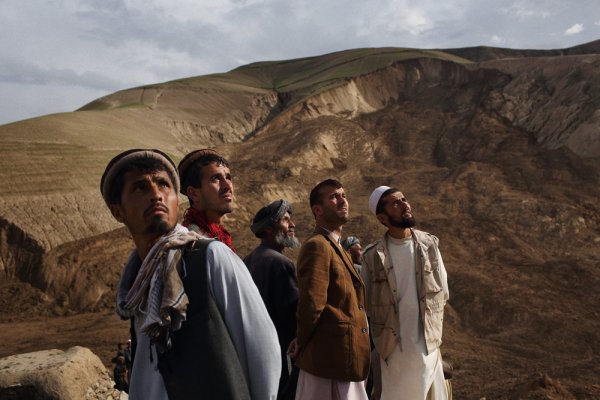 Hopes for Survivors Fade After Afghan Landslide
Next Up: Editor's Pick