A horse goes for a workout at Churchill Downs prior to the race, May 3, 2014, in Louisville, Ky.
Matt Slocum—AP
By Sam Frizell

The biggest day of the year for horse-racing fans has arrived.

Nineteen horses will gallop out of the stalls for the Kentucky Derby on Saturday evening, with a tough field of jockeys looking to join a list of champions in the first leg of the Triple Crown. The 1.25-mile race at Kentucky’s Churchill Downs features a tight field, but the much-admired California Chrome is the clear betting favorite to win the race after number-two favorite horse Hoppertunity was forced to withdraw due to an issue in his front hoof.

Here’s a list of the top competitors at the 140th Kentucky Derby:

California Chrome may be the first California-bred horse to win the Kentucky Derby in 52 years. The three-year-old chestnut colt has six wins and a second in 10 starts and has a huge hoof up in the betting odds, but was bred from comparatively humble origins. His trainer, Art Sherman, is trying to become the oldest to win the derby at age 77. Victor Espinoza, who as a jockey has already won the Derby before, will ride California Chrome Saturday.

Wicked Strong, the competition’s early second favorite, was named to honor Boston’s spirit after last year’s marathon bombings. The horse has strong odds, but he was placed on the outside gate, to the disappointment of trainer Jimmy Jerkens. Wicked Strong won the Wood Memorial in New York with a hard kick of the kind often seen at the Kentucky Derby. He’ll be ridden by jockey Rajiv Maragh.

Danza,another favorite of the race who emerged with second-place odds in Saturday betting,is named after Taxi star Tony Danza. The horse has powerful acceleration and won a big victory at the Arkansas Derby closing the last quarter of a mile in just 12 2/5 seconds. Joe Bravo will be Danza’s jockey.

Other top horses include Intense Holiday, ridden by John Velazquez, Samraat, ridden by Jose Ortiz, and Wildcat Red, whose jockey is Luis Saez.

Expect a winning time in the low 2-minute range as competitors push to beat the record 1:59 2/5 seconds winning time The winner will bring home $2 million. 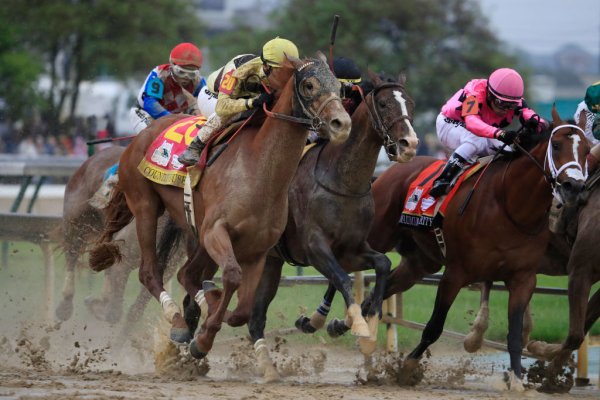