OSCE observer Axel Schneider walks among colleagues on a road 30 km from Donetsk in eastern Ukraine May 3, 2014, after being freed by pro-Russian separatists.
Marko Djurica—Reuters
By Sam Frizell

The pro-Russian insurgents’ leader in Slovyansk, Vyacheslav Ponomarev, said he ordered the release of the observers because of increasing insecurity in the city, according to the Interfax news agency.

Deadly clashes have increased in Slovyansk, the epicenter of the unrest, and two Ukrainian helicopters were reportedly shot down outside the city Friday, killing two crew members. Two additional soldiers died in firefights, the Ukrainian Defense Ministry said.

The freed military observers were on an internationally sanctioned visit to Ukraine as members of an Organization for Security and Cooperation in Europe team, when they were captured on April 25 in Slovyansk, the epicenter of the region’s unrest. The insurgents claimed they were NATO spies.

Russia’s appointed human rights commissioner, Vladimir Lukin, was sent to Ukraine to negotiate the insurgents’ release of the OSCE observers. The Kremlin denies it is in control of the violence in the region.

Conflagrations have broken out across the country as Ukrainian troops move to reclaim government buildings in the east, though many reports of violence have been difficult to verify. Pro-Russian insurgents claim that 10 local people were killed in a confrontation with soldiers at the edge of Slovyansk, the Associated Press reports, but reporters were unable to confirm the deaths. Other clashes were reported in Kramatorsk, a few miles outside of Slovyansk.

In the Black Sea port of Odessa, 300 miles southwest of Slovyansk, at least 42 people died in clashes between government supporters and opponents, raising fears of wider violence across the country. Thirty-one people died when pro-Russia demonstrators took refuge in a building that caught fire after protesters threw firebombs inside.

As the building burned with people inside, a crowd shouted, “Glory to Ukraine!” and “Death to enemies!” USA Today reports.

The Kremlin denounced the government in Kiev for encouraging extremism. “Their arms are up to their elbows in blood,” said Dmitry Peskov, Russian President Vladimir Putin’s spokesman, according to Russian news agencies. 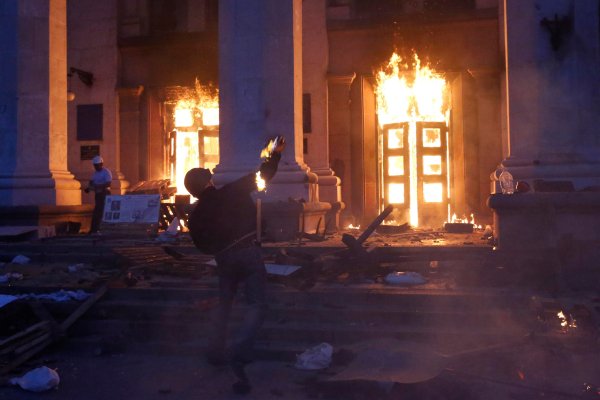 Dozens Killed in Ukraine Fire
Next Up: Editor's Pick