Over 2,100 Reportedly Dead in Afghanistan Landslide

The search for survivors in the Argo district was hampered by poor weather and insufficient tools, May 3, 2014.
Andrew Quilty—Oculi for TIME
By Krista Mahr

The death toll of a catastrophic landslide in a remote part of Afghanistan reportedly rose to at least 2,100 on Saturday, after a rescue effort slowed by lack of equipment and bad conditions.

Rescuers called off a search in the mountainous Argo district of the northeastern state of Badakhshan after over 2,000 villagers were buried under hundreds of feet of mud, Reuters reports, and turned their attention to the estimated 4,000 displaced by the disaster.

“More than 2,100 people from 300 families are all dead,” Naweed Forotan, a spokesman for Badakhshan’s provincial governor, told Reuters.

Two consecutive landslides took place on Friday morning after the area had been pummeled by heavy rains all week, according to the United Nations. The organization said that in addition to the mounting loss of life, the landslide had caused widespread damage to property and agriculture in the district. Badakhshan, a mountainous province in the far northeast of the country, borders Tajikistan, China and Pakistan.

Local officials had warned that the search for survivors and bodies would be slow, given the lack of equipment on hand in the far-flung district. Rescuers themselves faced a third potential landslide as they set to manually trying dig through the some 330 feet of mud.

With scores assumed dead, the U.N. mission in Afghanistan was said to have shifted its attention to at least 4,000 people forced to leave their homes, either directly due to Friday’s landslide or as a precautionary measure against future landslides.

The operation will test the capacity of Afghan security forces, which were deployed to the area to assist on Friday, according to reports. President Hamid Karzai, who is set to step down in the next few months once a new government is formed, said in a statement that he was “deeply saddened,” and that he had “ordered relevant entities to provide immediate assistance to people affected by the natural disaster and to urgently rescue those who are trapped under the debris.”

President Barack Obama, offering his condolences to the victims and their families during a press conference on Friday, said the U.S. was ready to help if requested. “Even as our war there comes to an end this year, our commitment to Afghanistan and its people will endure,” Obama said. “We stand ready to help our Afghan partners as they respond to this disaster.”

The disaster follows close on the heels of deadly flash floods in northern Afghanistan that left over 100 dead and displaced thousands more. “On behalf of the UN humanitarian agencies, I wish to extend our condolences to all those families who have lost loved ones as a result of these landslides,” Mark Bowden, the UN Humanitarian Coordinator in Afghanistan, said in a UN news release. “There have now been more Afghans killed through natural disasters in the past seven days than all of 2013.” 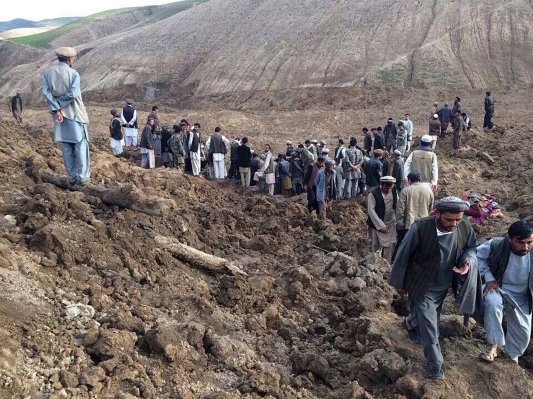 U.N.: At least 350 dead in Afghanistan landslide
Next Up: Editor's Pick