The U.S. Anti-Doping Agency has announced that U.S. sprinter Tyson Gay has received a one-year suspension for testing positive for an anabolic steroid May 2, 2014.
Christian Petersen—Getty Images
By Noah Rayman

U.S. sprinter Tyson Gay has been suspended for one year and forced to return his 2012 Olympic silver medal after testing positive for a banned substance, the U.S. Anti-Doping Agency said Friday.

The USADA said Gay accepted a one-year suspension that began June 23, 2013. He was also disqualified from all results since July 15, 2015, according to Reuters, when he first used the product that contained a prohibited substance.

Tied for the second fastest man in history, Gay holds the American record for the 100 meter race. At the 2012 London Olympics, he won the silver medal with the U.S. 4×100 meter relay team.

He admitted in July that he failed a doping test, and the USADA said his punishment was reduced because he cooperated with their investigation. He’ll be eligible to compete, including in future Olympics, beginning in June.

“We appreciate Tyson doing the right thing by immediately withdrawing from competition once he was notified, accepting responsibility for his decisions, and fully and truthfully cooperating with us in our ongoing investigation into the circumstances surrounding his case,” USADA CEO Travis T. Tygart said in a statement. 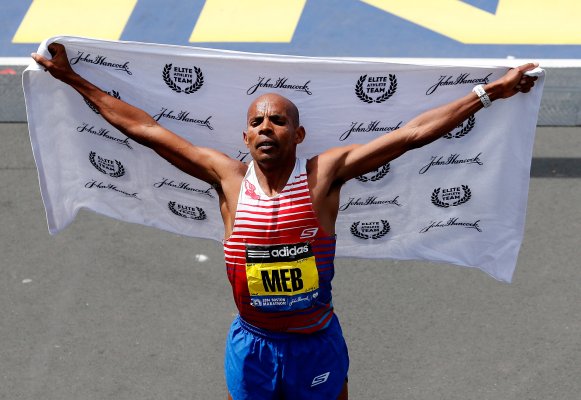 Meb Keflezighi's Boston Marathon Win Is a Victory For Us All
Next Up: Editor's Pick