Could It Be? Gas Prices May Have Already Peaked for 2014

We’re still weeks away from Memorial Day and the peak travel days of summer. But it looks like gas prices mercifully won’t go much higher in 2014.

The commonly held theory is that gas prices rise hand in hand with both temperatures and consumer demand. In other words, gas prices tend to inch up in spring and peak in the height of summer. Many years, this theory holds true. For instance, the priciest day ever for gas in the U.S. was in July 2008, when the national average spiked over the course of a few short weeks, eventually hitting $4.11.

In more recent years, however, the summer spike hasn’t been quite as reliable. In 2012, the national average for a gallon of regular reached a summertime low of around $3.35 in early July, before shooting to over $3.80 in mid-September, after the peak summer travel period had passed. And the peak time for gas prices in 2012 was actually reached in early April, when the average topped $3.90.

Last year, the trajectory was a little different. Gas prices rose in early winter, then took the nearly unprecedented step of retreating in March, remaining in the vicinity of 3.50 through mid-summer. In any event, prices at the pump didn’t inch up slowly and steadily as the days grew warmer and longer, like the theory holds.

Analysts say that 2014 is shaping up as yet another year that blows a hole in the theory. As a recent NPR story noted, warmer days are here, the nation’s peak road trip period is approaching, and “predictably, the price of gasoline is rising.” The national average for a gallon of regular shot from $3.53 in late March to around $3.70 a month later.

But drivers will be relieved to hear that gas prices have already plateaued. As of Friday, the AAA Fuel Gauge Report indicated that the national average was $3.683, which is 12¢ more than a month earlier, but also 1¢ less than a week ago.

Most importantly, the experts have reason to believe that, based on crude production and demand domestically and around the world, prices at the pump are only going to go down from here. The Energy Information Administration forecast calls for a national average of $3.57 through September, and an overall average for 2014 of $3.45, which would be lower than the last two years.

Likewise, the experts at GasBuddy wrote this week that their best guess is that “we’re starting to see clearer signs that we’re closer to top,” and that “the rally that started in February is nearing its peak.”

For the sake of the family vacation budget this summer, let’s hope we already got there. 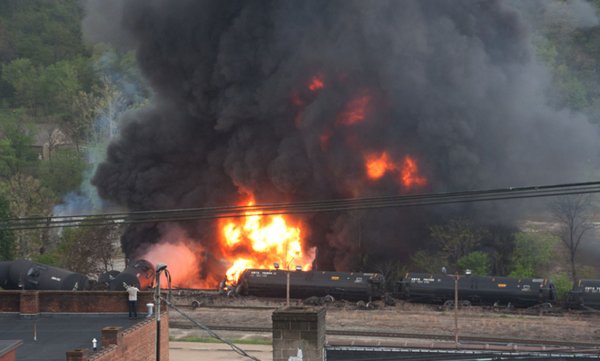 Oil Tanker Train Derails in Lynchburg
Next Up: Editor's Pick