I’m not sure what we’re supposed to take away from this surprise, presumably forced-early trailer for the next Call of Duty game. It stars Kevin Spacey ungracefully speechifying (well, it’s graceful as far as Spacey’s delivery is concerned — it’s the speech itself that made me wince), sneering and all but twisting the ends of an invisible Snidely Whiplash mustache as his neocon bombast is intercut with sizzle clips of people doing physically impossible things. The next season of House of Cards this definitely isn’t.

The trailer wasn’t supposed to drop until Sunday, but it sounds like Destructoid and Variety reverse-engineered Spacey’s involvement, then Destructoid posted the leaked trailer, which in turn seems to have forced Activision’s hand: that trailer went up on the official Call of Duty YouTube channel early this morning (also above), along with the below teaser trailer that stars Spacey’s eyeball, showing us what eyeballs do:

That eyeball might be impressive from a technical standpoint if Quantic Dream and Heavy Rain and The Dark Sorcerer didn’t exist. As for the game’s rendition of Spacey, all I can say is the uncanny valley is as wide as it is deep here.

But then when’s the last time you played a Call of Duty for the graphics anyway?

The gameplay details — multiplayer in particular, which is why I suspect most do play Call of Duty these days — we’ll have to wait a little longer for (the trailer confirms the game ships on November 4, though doesn’t list supported platforms, just that the footage in the trailer was rendered on Xbox One). In the meantime, enjoy 2:46 of power-drunk Kevin Spacey, a platoon of invisible drones, one of the Crysis nanosuit guys jumping around, some Halo UNSC drop-ships, the Morpheus vs. Agent fight on a moving truck from The Matrix Revolutions, someone in a gatling-happy Armored Core suit, someone doing a decent Spider-Man impersonation and some racy drone-on-drone action. 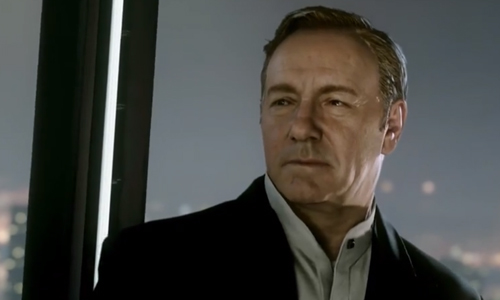 Kevin Spacey Stars in Call of Duty Trailer in Nod To House of Cards Role
Next Up: Editor's Pick