Reports: The South Korean Ferry Sank Because It Was Dangerously Overloaded

Rescue helicopters flying over the passenger ship Sewol as it sinks in waters off South Korea's southwestern coast on April 16, 2014
Yonhap—EPA
By Charlie Campbell

The Sewol ferry was dangerously overweight when it sank, according to reports appearing in South Korean media, as the official death toll from the disaster rose to 226 with 76 still missing.

Investigators looking into what caused the 6,825-ton vessel to capsize on April 16 have revealed that operators reduced its ballast water — vital to maintain stability — to make room for three times more cargo as usual, citing testimony from a first mate on the ship.

The Korea JoongAng Daily quoted a prosecutor on the investigation team as saying: “[The crewman] said that he asked the division head to stop loading cargo because the ship might sink because of its weight. It appears that such a practice was not uncommon.”

Despite a maximum cargo limit of 987 tons, the ship was allegedly hauling 3,608 tons when it capsized off the country’s southwestern coast. Prosecutors have detained the captain and 14 other crew members who deserted the sinking ship, and also raided the offices of owners Chonghaejin Marine and the homes of key executives.

The investigation is also looking into modifications that increased the number of cabins on the third, fourth and fifth decks between October 2012 and February 2013. There are also unconfirmed reports that extra heavy machinery was added to the ship but not included on its manifest.

The ferry had 476 passengers and crew on board — including 325 high school students — when it began to list heavily and eventually turned over on a journey from Incheon to the holiday resort of Jeju Island. 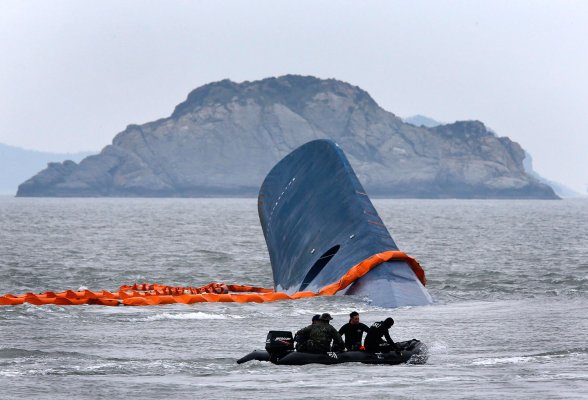