On Saturday, a game of hockey handed the U.S. and Russia a rare chance to ease the history of mistrust between them. That chance was missed.

When the stands cleared out of the Olympic stadium in Sochi that evening, most Russian fans came away feeling cheated. Their team would have won the crucial match on their home turf had the officials—one of whom was an American—not disallowed a Russian goal in the final period. So when that decision cost Russia the game, the old grudges and conspiracy theories began to bubble up again. It wasn’t anyone’s fault. Certainly not the players. But the way the game ended was especially painful in light of how it began.

In the first period, the stadium’s main camera zoomed in on two brawny men, both wearing Viking helmets and warpaint of the Russian tricolor, and both screaming their heads off for Team Russia. Just behind them in the stands, a contingent of about a hundred American fans were doing the same for their team, and they were all getting along beautifully. “Both sides are playing their hearts out,” said one of the Vikings, Vladimir Lomaev, a Sochi native, when the first period ended. “And if anybody starts yelling ‘Yankee, go home!’ then I’ll go over there and shut them up myself.”

That sense of respect, if not outright affection, filled the stands in the the Bolshoi Ice Dome on Saturday. Nobody booed the opposing team or heckled the rival fans, at least not until the heart-stopping shootout that broke the tied score after overtime. “The trash-talking is way worse in Canada,” said Woody Groves, a 28-year-old hockey fanatic who came from Wisconsin just to attend the Olympic tournament in Sochi. It was his third visit to Russia, he said, “And this is the nicest I’ve ever seen a big group of Russians in one place. No question they have put on their best faces for this.”

And he was right. The Russian fans came to the game on Saturday not only to support their team but to break through some of the tensions and stereotypes left over from the Cold War. The two Vikings, both 47, had served together on the same Soviet nuclear submarine in the late 1980s. “Our vessel used to swim up to Los Angeles on patrols,” says the other Viking, Vladimir Vorozheykin. “All our lives it was pounded into our heads that America is the ultimate enemy.” Now his two children both study in the U.S., and he often travels there to visit them. “We have nothing but love for America,” his friend Lomaev broke in. “Please write that in your magazine.”

But when the tie-breaker handed the win to Team USA, the sense of brotherly love was quickly drowned in accusations. Even the head coach of the U.S. team admitted that the disallowed Russian goal had looked fair to him. “I was pretty sure the puck had gone in the net,” coach Dan Bylsma said at a press briefing after the game. “I didn’t get an explanation for the no-goal call, so I’m not sure what the reasoning was.” At the same briefing, the coach of the Russian team called the decision a “mistake,” but said he had no plans to contest it.

Many of fans who had watched the game at home then took to Twitter to voice their frustration. “Shame on the team of that country, which can’t beat us without help from the judge,” wrote Alyona Arshinova, an official from the ruling political party of President Vladimir Putin. “They think they won,” wrote Bekkhan Agaev, a lawmaker in parliament for Putin’s party. “We are acting like we lost. But the facts speak for themselves! There was a third goal” for Team Russia.

So far, Putin has not commented on the loss, but when the camera zoomed in on his reaction to the final score, it looked like he had just swallowed a puck. As the fans filed out of the stadium, somber and confused, it was hard to recognize them as the same 10,000 people who had been smiling and dancing in the stands an hour earlier. One young fan, who wore a Soviet flag wrapped around his shoulders, wasn’t even alive under the Soviet Union, but he seemed to carry its grudges. “Nothing is forgotten,” Anton Ivanov, a 16-year-old Sochi native, said through his teeth near the exit. “The Soviet Union is gone. We lost the Cold War. But nothing is forgotten.”

Even the Vikings were not in the mood to be sportsmanlike. What confused them most, they said after the game, was the fact that the crowd was not shown any replays of the disallowed goal during the game. During Russia’s match against Slovenia on Friday, there were several contested goals, Lomaev said, and each time they showed the replays several times to explain the officials’ decision. “This time they showed us nothing, even though we all saw that the goal was there,” he said. “Does that hurt? You’re damn right that hurts. But at least we have nothing to be ashamed of. We played a brilliant game.” He no longer had the same compliments for Team America. 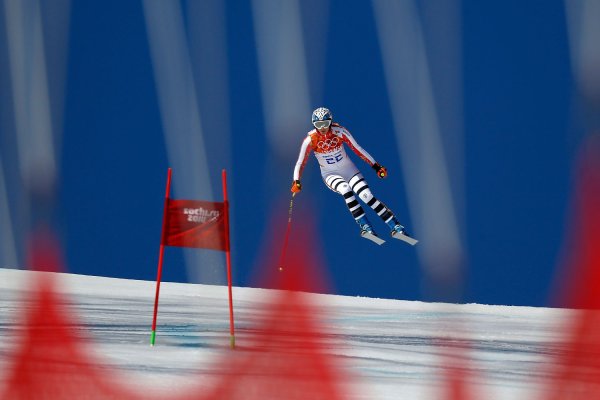 Must-see Images from Sochi Olympics: Day 10
Next Up: Editor's Pick