Osama bin Laden Situation Room Photo: Where Are They Now?

Osama bin Laden was shot and killed by a team of U.S. Navy Seals in Abbottabad, Pakistan exactly three years ago. Two dozen special forces operatives entered bin Laden’s hidden compound during the night, executed the most infamous terrorist in modern times and left with his body, destined for the North Arabian Sea. It was a dramatic end to the painstaking search that had begun long before the attacks of September 11, 2001.

Back in the United States, the nation’s top military and civilian leaders were gathered in the White House Situation Room to watch the operation unfold live. President Barack Obama’s decision to order the strike was based on what then-National Security Advisor Tom Donilon famously called “a 50-50 chance” that bin Laden was even there at all.

A White House photographer captured what has since become an iconic image when Obama, Vice President Joe Biden, Brig. Gen. Marshall B. Brad Webb, Hillary Clinton and other heavy-hitters watched stone-faced as the operation unfolded. The mood in the Situation Room was tense, with all eyes glued on a live video feed provided by drones hovering high above bin Laden’s compound.

President Barack Obama, Vice President Joe Biden and former Secretary of State Hillary Clinton, along with with members of the national security team, receive an update on the mission against Osama bin Laden in the Situation Room of the White House in Washington, D.C., on May 1, 2011.
Pete Souza—The White House

Where are the players in this iconic image today? President Obama, the central figure in the drama and the man responsible for giving the final order to strike, is still commander in chief, of course. And while many of the people in the room have since retired from government life, a few continue to aspire to prominent political positions—most notably, Hillary Clinton, who may well be paving her way to a second presidential bid.

Here are the 13 men and women pictured that day, from left to right:

Joe Biden, vice president of the United States, has continued to play an active foreign policy role, most recently visiting allies in eastern Europe as part of the escalating Ukraine crisis. He originally opposed the raid on bin Laden’s compound, according to Mark Bowden’s book on the bin Laden strike, Finish.

Barack Obama, forty-forth president of the United States, called the operation against Osama bin Laden “the most important single day of my presidency.”

Marshall B. Webb (seated at the head of the table, with a laptop) is a United States Air Force major general who served as Assistant Commanding General of the Joint Special Operations Command during the raid.

Mike Mullen (standing, wearing a tie), a career naval officer, was serving as Chairman of the Joint Chiefs of Staff and the principal military advisor to the president when the photo was taken. He has since retired.

Tom Donilon (standing, arms folded) was President Obama’s National Security Advisor from October 2010 until June 2013 and is now a fellow at the Council on Foreign Relations. Donilon didn’t want President Obama to watch the raid, fearing it would appear he was micromanaging the strike. Obama reportedly insisted, striding into the room, saying “I need to watch this.”

Bill Daley (standing, with jacket) was the White House Chief of Staff for President Obama from January 2011 to 2012. He was preparing for the 2014 Illinois gubernatorial race before dropping out of the contest early for personal reasons. He recently became head of U.S. operations for a hedge fund that was launched last year in Switzerland to avoid following the the U.S. Volcker Rule.

Denis McDonough (seated) was the Deputy National Security Advisor when bin Laden was killed. He now serves as the White House Chief of Staff.

Tony Blinken (standing, peering over Daley’s shoulder) was a national security adviser to Joe Biden during Obama’s first term and had a seat at the table during daily security briefings. He’s now the President’s Deputy National Security Adviser.

Hillary Clinton, one of the most visible members of the team other then President Obama, has said she is considering running for president in 2016.

Audrey Tomason (standing, furthest in back),who the White House has said is a director for counterterrorism, is something of a mystery. When pressed, an official told the Daily Beast the White House does not generally discuss intelligence personnel.

John Brennan (standing, wearing gray), now director of the Central Intelligence Agency, was Homeland Security Advisor at the time of the raid.

James Clapper (standing, wearing tie) has remained the Director of National Intelligence in the intervening three years since the photo was taken. Clapper sparked controversy in March 2013 when he claimed the NSA does not “wittingly” collect data on millions or hundred of millions of Americans. Edward Snowden’s leaks calling Clapper’s testimony into question were published three months later.

Robert Gates (seated) was Secretary of Defense at the time bin Laden was killed. He retired just two months later and is now the Chancellor of the College of William & Mary. He originally opposed a raid before changing his mind on the day of the strike. 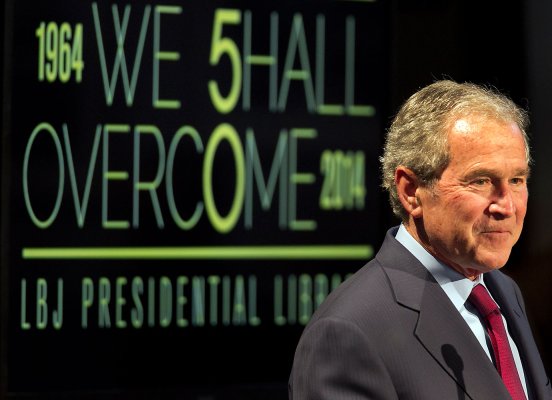