This Billboard Sucks Pollution from the Sky and Returns Purified Air

Remember the billboard that turned air into drinkable water? The one located in Lima, Peru that produced around 26 gallons of water from nothing more than humidity, a basic filtration system and gravity?

Its creators, the University of Engineering and Technology of Peru (UTEC), are back with an encore idea that sounds just as clever. This one involves a slightly different sort of billboard — also located in Lima — that sucks pollution from the sky and returns purified air to the surrounding areas. Not just trace amounts of air, like those claimed by conventional room-based HEPA air purifiers, either, but 100,000 cubic meters of urban air per day. That’s over 3.5 million cubic feet, which UTEC says is equivalent to the work of 1,200 mature trees. That’s a lot of air. Furthermore, UTEC claims the billboard is “totally effective in removing [the] dust, metal and stone particles” that contaminate air spaces around construction zones, and which can lead to life-threatening health problems, from respiratory issues to cancer.

How do you quantify air purification? That’s the trick. The water-producing billboard drew attention because it worked in directly quantifiable terms. Lima, which has nearly 9 million inhabitants, is a coastal desert — it sees almost no annual rainfall. But since it sits along the southern Pacific Ocean, the city tends to be very humid, thus innovative water extraction solutions make sense. And you can see, touch and drink water. You can measure it. When you’re collecting it in a giant vat, you wind up with visible results, like “2,500 gallons of water in three months.” People could drop by the billboard with buckets, turn on a faucet and collect those gallons.

When it comes to air, purification claims are harder to verify: You’re talking about a mixture of gases — mostly nitrogen and oxygen — that you can’t see or touch or encapsulate in the same ready way you can water.

Before we get into the “how” behind UTEC’s idea, let’s talk about pollution in Lima, because it’s as extreme as the city’s water issues. According to the World Meteorological Association (in September 2012), Lima has the highest air pollution levels in all of South America, most of it related to transportation and factories, according to the head of the country’s national weather service. What’s more, the hills surrounding the city act as a natural barrier, preventing that polluted air from circulating. Recent reports indicate air pollution in Lima is on the decline, but even with an over 50 percent decrease in air pollution over the past decade, the city’s pollution levels are triple the maximum recommended by the World Health Organization.

Enter the Barranco section of Lima, the city’s art district. UTEC’s billboard sits at the intersection of Bajada Armendáriz and Paseo de la República — currently near a construction zone (UTEC says the construction industry is booming in Peru, with zones “in almost every block”).

Here’s how it works: UTEC says it’s employing basic thermodynamic principles — that is, principles related to shifts in temperature, pressure and vacuum — to combine incoming air with water in a mechanism that balances their internal heat. That transaction results in the pollutants (dust, small particles of metal, germs and bacteria) hanging back in the water, effectively scrubbed from the air. UTEC says it keeps metrics on the actual amounts, and measures them daily: it told me that between March 24-30, 49,800 people benefitted from 489,000 cubic meters of purified air, and that its billboard managed to eliminate 99 percent of the airborne bacteria from that total.

The university describes all of this as “a highly efficient continuous process, with very low energy consumption” — just 2.5 kilowatts (2,500 watts) of electricity per hour, or roughly what an emergency generator might consume powering your bare essentials in a small home. UTEC says the billboard’s benefits extend to a radius of five city blocks, benefitting both residents and construction workers, and that the water used by the billboard is fully recyclable. The university adds that it’s using the extracted materials as an opportunity to analyze the residual pollutants, presumably to get a better read on pollutant specifics with an eye toward building even more thorough billboards down the road.

As with the water-producing billboard, the air-purification system is being promoted with the help of ad agency FCB Mayo (formerly Mayo DraftFCB). UTEC’s director of promotion, Jessica Rúas, says the university’s goal in working with the agency was “to demonstrate that engineering is behind everything,” and that the air-purifying billboard is “closely aligned with the university’s mission of educating creative engineers who are sensitive to social needs and have extensive scientific knowledge that enables them to become researchers and find solutions to society’s problems.”

Assuming the billboard works as well and broadly as claimed, which is to say sufficiently well to protect workers as well as residents in areas where pollutants are especially hazardous, imagine these billboards going up any time you had a sufficiently large construction zone — a step that just became synonymous with a construction company’s preparation process.

I just finished building a home myself in a booming residential association — I now live across the street from several homes that are all going up simultaneously and in various stages of completion. I have no idea what kinds of things I (and my wife, and my 21-month-old son) might be unwittingly breathing as I stroll through the neighborhood in the evenings after supper, but I’d love to think something like UTEC’s idea might make the air cleaner (or even post-construction, targeting excess pollen, say, or ozone), to say nothing of the more critical benefits it might provide in urban zones with epically dirty construction projects. 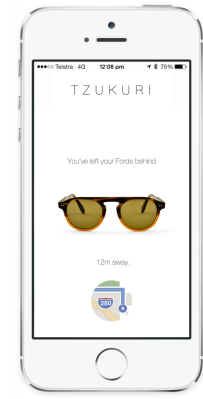 These Sunglasses Connect to Your Phone So You Don't Lose Them
Next Up: Editor's Pick