Sochi's Olympic Cathedral May Be Its Holiest White Elephant

Russia's President Vladimir Putin attends the Orthodox Christmas service at the Cathedral of the Holy Face of Christ the Savior in the Russian city of Sochi on Jan. 7, 2014.
Maxim Shemetov—Reuters
By Simon Shuster

On Jan. 7, exactly a month before the Winter Games in Sochi began, Russian President Vladimir Putin stopped by the host city’s new cathedral to attend Orthodox Christmas Mass. It seemed like a symbolic moment. In record time, Putin’s government had built an entire Olympic city, complete with stadiums, hotels, railroads and freeways, on a patch of swamp in Sochi’s suburbs. It was Putin’s little miracle, and what better place and time to celebrate than on Orthodox Christmas in Sochi’s new church? There were just a couple of problems.

The ornate Cathedral of the Holy Face of Christ the Savior, built mostly in the Byzantine style, was still under construction at the time. It had been consecrated only a few days earlier, before the altar had been assembled. And then there was the issue of its location. Wedged between railroad tracks and a freeway overpass, the church was nearly impossible for any locals to approach by foot without jumping fences and running across several lanes of traffic. So people had to be bussed in to stand behind Putin and his key Olympic managers during the Christmas Mass. With that, the cathedral served its first essential function — a photo opportunity for Putin. But whom it will serve when the Olympics leave town is so far a bit of a mystery.

“There’s an old Russian tradition that when you make a conquest of land, the first thing you do, before building a fort or a bathhouse, is build a church on top of it,” says Vasili Gromov, an amateur historian and restorer of Orthodox churches in the region of Krasnodar, which includes Sochi. “But this one doesn’t make much sense.”

On the second Sunday of the Olympics, Gromov, who is 76, came early to the evening Mass to voice some concerns to the priests. How could they put such a massive cathedral in a place where people can’t get to it? “I circled around for an hour before I figured out how to get here,” says Gromov. “There are fences and freeways everywhere,” he says. “It’s like a maze!” So he was not surprised to see the cathedral nearly deserted during the long evening service, with never more than a dozen parishioners at a time, most of them Olympic tourists. “And who’s going to come here when the Games are over?” Gromov asks.

TIME put that question to the cathedral’s abbot in January, a jolly old priest named Father Flavian, who is prone to bouts of giggling that make him place his hand over his mouth. He did not have any great answers. The church, he explained, was not really part of the original Olympic project; it was conceived as an afterthought a year before the Games began, the holy icing on the Olympic cake. “It’s a miracle that we even built it in time,” he said. “We only had four months to cover the whole interior in frescoes, which is some kind of Olympic record!” (Indeed, when two reporters visited on Jan. 17, workers on scaffolds were still painting the final touches.)

But with all the rush, few considered the placement of the church or its functionality. “I know, it’s true, it’s really hard to get here,” Father Flavian admitted. “We’re pretty much on an island.” Then, as another fit of chuckles started coming on, he added, “When I visit Moscow and the higher clergy asks me where I’m from, I tell them I work out on the bogs.”

That is technically true. Just like the stadiums hosting the Olympic Games, the church rests on marshlands in a suburb of Sochi called Adler, right on the Black Sea coast, and its lack of solid bedrock has bedeviled the organizers from the beginning. The ground was so moist and unstable that Olympic buildings had to be redesigned several times, contributing to the massive cost overruns that eventually brought the overall price tag to around $50 billion — more than all the previous Winter Olympics combined.

The result is undoubtedly impressive — but impressive enough to justify the costs? Only time will tell. So far, the Olympic Park that houses the stadiums feels like a fantasy land, the kind you might get if architecture students put all their final projects on a table and waved a magic wand to make them real. On Saturday, when the weather was fine, tens of thousands of tourists wandered dumbstruck among them, photographing everything in sight. But it was hard not to think about what Russia’s Olympic Oz will look like when the Games and the tourists are gone. Sochi, already the record holder for the most expensive Games, may get another dubious honor: home to the greatest arrangement of white elephants on the planet.

The stadiums, of course, will be used in the future to host sports tournaments, conferences and summits. But beyond abiding by Russian tradition, it’s hard to see the future function of this enormous church. Even during the Olympics, attendance has been dismal. “It hurt me to see it,” says Gromov, who works on the restoration of churches near Sochi that were destroyed in Soviet times. “They’ve banished it so far, even the athletes can’t come to pray.”

That wasn’t totally true. One of the volunteers of the Olympic organizing committee, Lina Balciunaite, who is from Lithuania, has been put in charge of shepherding athletes to the cathedral in search of an Orthodox blessing before their competitions. On Sunday, she took a pair of Georgians on the trek, but after parking their car on the other side of the freeway, it took them half an hour to walk the rest of the way. “Inside the Olympic Village we have a multiconfessional center for prayer,” she said. “But it looks like an office more than a church. So some Orthodox Christians have asked if there’s a real cathedral around, mostly Ukrainians or athletes from Kazakhstan.” In total, she said, there have been about six.

And what about when they’re gone? Not to worry. Father Flavian has a plan. He says the cathedral’s island of property between the railroad tracks and the overpass will also be home to a “cultural and historical” center for international religious congresses. There will be a hotel on the grounds, a restaurant where newlyweds can have their wedding receptions, a business center with office space, and a conference hall for 350 people.

“The Lord never frowned on entrepreneurship,” said the priest with another smile. The money for all this, he said, is meant to come mostly from the regional government, assuming it will have much to spare on developing Sochi after all the treasure it’s already poured into the Games. So far, there are no guarantees. “We are petitioning for assistance,” said Father Flavian. “And praying to the Lord.”

When the Olympics pass, he also hopes people will at least start making the hour-long trip from the city of Sochi for the high holidays, if not for Sunday Mass. “People just aren’t used to us being here yet,” he said. Only a few diehards made it to the evening service from Sochi on Sunday, among them Pavel Dranichnikov, an engineer with a handlebar mustache who works on the railroads. “Wherever my work sends me,” he said, “I always visit the local church. I’ll walk 10 to 20 km if that’s what it takes.”

But others may lack that abundance of zeal. Even if one does make it to the church from the Olympic venues, the best way to walk back goes right over a busy freeway, where a lone policeman named Aleksandr Tkachev was directing pedestrians on Sunday. “Most people coming from the church just walk this way,” he told me, pointing to the right lane of traffic. “It’s not very safe, but there’s no pedestrian walkway to get where you’re going.” For a few moments, no cars came into view, so this reporter ran directly into traffic, comforted only slightly by the recent blessings of Father Flavian. 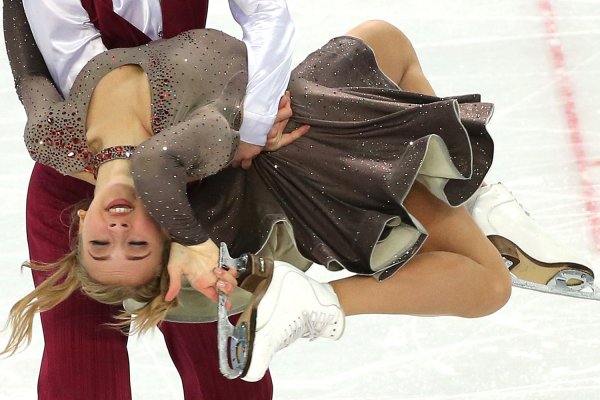 Must-see Photos From Day 11 of the Sochi Olympics
Next Up: Editor's Pick