How Not to Lose Another Jordan Davis

Denise Hunt tears up as she finds out the jury is deadlocked on the first-degree murder charge for Michael Dunn outside of the Duval County Courthouse as the jury enters the fourth day of deliberations, Feb. 15, 2014, in Jacksonville, Fla.
Kelly Jordan—The Florida Times-Union/AP
By John McWhorter

There are times when civil disobedience isn’t the answer.

That’s an odd thing to say during Black History Month and especially after the hung jury result of the Michael Dunn trial. Surely the way we keep the Struggle going — as parents of my generation have always urged us to do — is to dare the Man to try to beat us down.

That’s the implication of this popular piece, which claims that black people telling their sons to avoid offending whites only encourages racism. So black kids should not have to turn down their music or “suppress their attitude,” because this is being “submissive” to whites who wish they wouldn’t be “so, well, black.”

It is easy to get a rise with this kind of rhetoric, but it’s better as theater than counsel. Is taking a cue from the kids who got themselves hosed, beaten and mauled in the streets of Birmingham really constructive in these times?

Because after all, that’s what a piece like this is suggesting. The columnist seems to imagine black boys attitudinalizing across the U.S. and white men somehow learning that it’s racist to not like it. However, the murder of Jordan Davis suggests a certain unreality in that vision.

One thing we can all agree on is that racist attitudes are very deep-seated. Many question whether they can ever be eradicated. As such, in savoring the idea that black boys act up all they want, aren’t we sentencing them to fates like Davis’?

Birmingham worked because people could see this kind of thing on TV for the first time. But TV is no longer a novelty, and the problem today is hardly that no one sees or hears about cases like Trayvon Martin’s and Davis’. The issues are harder today.

Besides that, encouraging black boys to suppress their self-control is to teach them to get down in the mud with the Dunns. It’s one thing to wear a hoodie or even to don one as a gesture of defiance as many supporters of Trayvon Martin have. However, are we really continuing the legacy of Dr. King to think it’s just fine for black teenagers — or any teenagers — to blast music in public parking lots? Since when is that being “so, well, black?”

No, no one is supposed to die for turning up rap music. But to deem it a social tort to ask black boys to turn it down gets us nowhere. Davis’ murder was a horror; all of the sin was Dunn’s. But surely, if we could roll back time, we would make Davis turn down the music – and not call Dunn a cracker or a bitch. Dunn would have taken his racism home with him and Davis would be alive now.

The response to the Jordan Davis murder, then, is not “Act up.” The first response is to crusade against laws like Florida’s Stand Your Ground law that make it so hard for even fair-minded juries to convict murderers like George Zimmerman.

Then, the larger issue would seem to be about how easy it is to get a gun. To focus on that, however, requires a spiritual self-discipline equivalent to the one that got those brave black people out into the streets 50 years ago. Namely, the gun issue is harder to racialize.

What I mean is this. Race played a part in the deaths of Trayvon Martin and Jordan Davis. There were, as academics are now given to putting it, “intersectionalities” with race in play. If Martin and Davis had been white, they’d surely be alive.

But let’s say a Martian observer buzzed down to the U.S. and wrote up a chapter on violence in their report back home. The Martian would not write of a particular problem with white men killing black boys but of people killing people.

And despite claims that the media overplays black crime, it’s often black people killing black people that we don’t hear about — and not only gangland episodes. Just this Saturday, as the Dunn verdict was being discussed, a black man killed a black 15-year-old girl for perpetrating a prank on his son. Last spring, a few months before the Zimmerman trial, two black teens shot a white baby dead during a robbery.

The problem is too many guns in too many hands. Racists aren’t the only ones who are carrying them; it’s America as a whole. It’s time to act up about that, and about the laws that support people getting away with using guns to kill people.

And maybe after that we can see how far we can get with spraying white people’s mental attics for racism. 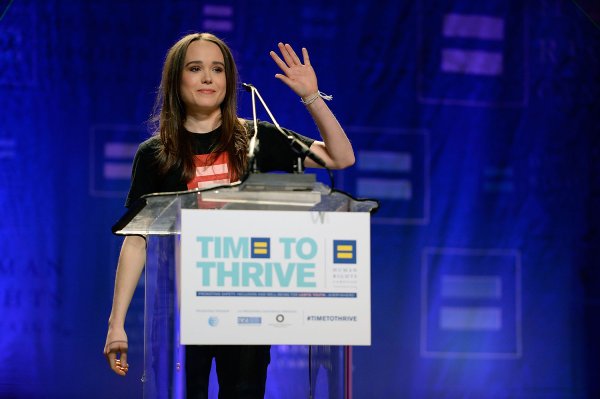 Ellen Page: Is Coming Out Really Still 'Brave'?
Next Up: Editor's Pick