Telecom titan AT&T has reportedly reached out to satellite giant DirecTV about a possible merger that would reshape the TV business at a time of rapid change in the industry.

Such a deal would likely be valued at more than $40 billion — DirecTV’s current market value — and would be another example of the decades-long consolidation of the telecom and cable industries. U.S. broadband leader Comcast is currently trying to persuade regulators to let it buy Time Warner Cable in a $45 billion deal.

DirecTV would be open to a merger with AT&T, the Wall Street Journal reported late Wednesday, citing a “person familiar with the situation.” Talks between the two companies have intensified since Comcast announced its intention to buy Time Warner Cable, the paper reported, though it cautioned that the talks may not yet be in an advanced stage.

Given the increasing consolidation in the broadband industry, an AT&T merger with DirecTV would make sense for both companies.

DirecTV has the second largest pay-TV subscriber base in the country but lacks a competitive broadband Internet offering of its own. AT&T is forging ahead with its own broadband plans but would love to get its hands on DirecTV’s satellite-TV business. And AT&T, which is currently worth $185 billion, could certainly afford the deal.

Comcast’s proposed tie-up with Time Warner Cable, its smaller rival, already faces intense scrutiny from the Justice Department over competition concerns, not to mention the Federal Communications Commission, which must ensure the deal advances the public interest. An AT&T merger with DirecTV would face equally intense scrutiny.

News of the AT&T interest in DirecTV comes as the cable industry is meeting for its annual conference in Los Angeles.

On Wednesday, Comcast CEO Brian Roberts made the case that the Time Warner Cable deal would be great for competition because it would strengthen Comcast’s position against the likes of AT&T and DirecTV. 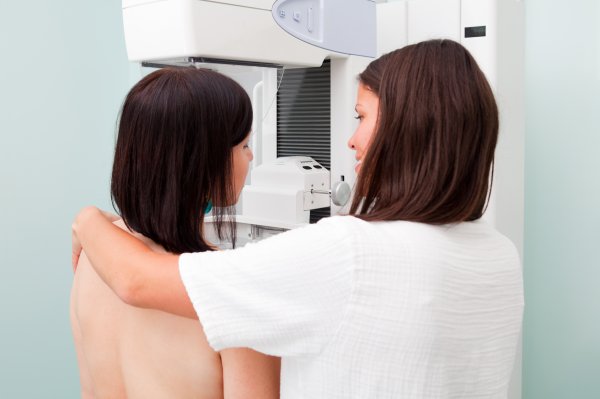 This One Graphic Will Change the Way You Look at Breast Cancer Screening
Next Up: Editor's Pick