The Walking Dead’s writers like to pretend that the show is a meritocracy and any character is fair game. But minor characters just sort of die off, while major character deaths usually serve an important purpose in the plot. When Rick killed Shane, it resolved a bizarre love triangle and marked a turning point for the show’s protagonist. The way Lori died was barbarous, but most of us weren’t that sorry to see her go; conversely, Andrea’s death was a bit of a bummer and also managed to feel anticlimactic.

Hershel’s beheading was arguably the toughest, not only because the character had become woven into every corner of the story, but because Scott Wilson gave the show major acting gravitas. When Michonne discovered Hershel’s disembodied zombie head last week, it was a reminder of how much viewers lost when the prison standoff turned into an epic tragedy.

This week’s episode, “Inmates,” gave us a pretty full accounting of the important survivors. In the alive column (in order of appearance): Beth Greene and Daryl; Tyreese, Carol’s knife-wielding child prodigies, Judith (whew, that one worried us), and Carol (surprise!); Shasha, Bob Stookey and a very distraught Maggie Greene, who will stop at nothing to find Glenn; and finally Glenn, who somehow managed to pass out in the prison on the two square yards of real estate that would keep him safe while he was unconscious. For those of you keeping score at home, that’s zero (0) major characters other than Hershel who failed to survive the chaotic gunbattle/zombie invasion.

That may sound like sour grapes, like I’m complaining that the writers are playing it safe by not killing enough big characters, but the truth is I’m very impressed. Ever since Game of Thrones killed off Ned Stark (played by the incomparable Sean Bean) at the end of the show’s first season, many viewers of serious episodic television think killing off a main character is a brave choice, sacrificing one of the heavyweights for the sake of the story. Sometimes that’s true, but don’t forget that Ned Stark’s death surprised nearly everyone who hadn’t read the book and not a single person who had. George R. R. Martin crafted a crucial lesson in A Game of Thrones, one that TWD‘s writers learned well – if you’re going to take out a maior character, make it count. It has to be more than just a pivot point in the plot; it needs to be the moment when the story as we know it will never be the same. TWD‘s writers haven’t always applied that maxim evenly, but when they have, it’s made for powerful television. They accorded the appropriate honors to Shane and Lori — not so much Andrea, but certainly with Hershel.

It took two episodes of this half-season to take full account, but now we know there were no meaningless deaths. It’s only a matter of time before the core group comes together, which appears to be a small geographic feat since they’re all tap-dancing around the same central Georgia terrain. There will, however, be some significant detours over the next several episodes, and if past season finales are any indication, we’ll probably lose another major character before this season is out. Let’s hope the writers remember Martin’s lesson and make it one that counts.

And now for a hail of bullets:

Zombie Kill Report: The half season is starting off strong, with another episode with several dozen walker kills. High props go to Maggie for smashing a zombie’s head against the side of a bus, breaking up the scads of zombies killed by arrows, knives and repeated hits by blunt instruments to the head. I was skeptical at first whether Glenn’s riot gear/body armor plan would succeed, but he may be onto something. The only way zombies can threaten people is by biting them, and the arms and legs seem like particularly (pun intended) juicy targets. Cover them up with some hard plastic and kevlar, then just keep moving. Sounds like a winning tactic to me.

The prodigal daughter returns: As I scratched off the list of main characters who merited worrying about their survival, I wasn’t expecting to see Carol. The girls sure seem happy to see her; she’s a formidable fighter, and she managed to survive on her own for at least a few days; and her return sets up plenty of potential conflict when she’s reunited with Rick. Her story – that she had stayed outside to look for more supplies and missed the prison battle – worked on Tyreese, but the others may be more skeptical. I never bought the story that Carol killed Karen. I always thought it was one of the girls, and we should finally get the truth.

New faces: It’s been a little while since we’ve had new characters that matter. Bob Stookey was probably the last newcomer who had a real impact. In the final scene, we saw some shady looking characters who look like former soldiers (they are). Their ringleader, sporting a dynamite Fu Manchu, is Michael Cudlitz, the most exciting actor to join the show in some time. Most famous for his starring role in the cop drama Southland and for playing Sergeant “Bull” Randleman in Band of Brothers, Cudlitz brings a lot of heft to what seems to be our new villain. 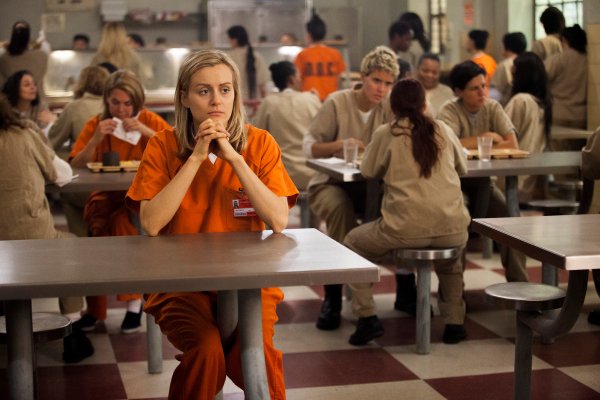 Orange Is The New Black Returns June 6
Next Up: Editor's Pick