Once again, according to the headlines, the Pentagon has bowed to Islamic demands:

— “At a time when the U.S. should at the very least be wary of those who openly wear their Islamic radicalism around their face and head—beards for males, hijabs for females—the U.S. Pentagon (of all places) is embracing them in ‘celebration of multiculturalism,'” says Raymond Ibrahim, a self-described “Middle East and Islam expert” in a column headlined The Pentagon’s Bow to Islamic Extremism.

–“As our troops in the combat zone contend with the release of Taliban killers and restrictive rules of engagement, they must contend with an Obama administration cowering to Islamic political correctness at home,” writes Allen West, a former Army officer and congressman, on the Fox News website.

The Pentagon recently tweaked its rules on facial hair and turbans after years of pressure from members of the Sikh religion, not Muslims.

“The changes come after Sikhs pressed the military to allow members of their faith to grow beards, keep their hair uncut and wear turbans, as required by their faith,” the Wall Street Journal reported Jan. 22, the day the Pentagon announced the change. “In recent years, the military has begun to accommodate the religious requirement of Sikhs and the new directive extends that accommodation more broadly.”

The Voice of America added: “The new rules come not as a result of pressure from Muslims…but from a small group of Sikhs.” (There is a handful of Sikhs in the U.S. military, and perhaps 4,000 Muslims.)

The policy change doesn’t mean Sikhs (or Muslims, for that matter) can automatically grow beards or wear turbans on duty. It simply gives their commanders the option to let them do so. “We’re saying as a department we will accommodate these preferences and religious requirements,” Rear Admiral John Kirby, the Pentagon’s spokesman, said last month. “Number two, the mission can’t suffer as a result.”

It is understandable, following the horrors of 9/11, that Americans might feel ill will toward Muslims, even as the two presidents since then have urged their fellow citizens not to lump jihadists in with the overwhelming majority of peaceful Muslims. But rhetorical open season on Muslims has apparently reached a point where, in some quarters, they’re attacked for efforts they didn’t actually champion.

In a strange twist, Sikhs began pushing for the Pentagon’s tolerance following the terror attacks. They knew that “we would continue to be soft targets for hate groups and anti-Muslim groups, while still facing the typical racism, bullying and job discrimination that has plagued every minority group that has fought for acceptance in America,” says Major Kamal Kalsi, an Army doctor who has seen service in Afghanistan and won an exemption to keep his unshorn beard and hair, and wear a turban, before the recent policy change.

The Pentagon has been criticized for its deference to Muslim sensibilities in recent years, especially concerning the case of then-Major Nidal Hasan, an Army psychiatrist convicted of killing 13 people in a rampage at Fort Hood, Texas, in 2009. A military inquiry into the slaughter refrained from citing Hasan’s Muslim religion as a cause, and there was a months-long debate over whether or not he could keep a beard that he said he wanted for religious reasons during his court martial. A panel of officers found him guilty last August and sentenced him to die; he is now on the military’s death row at Fort Leavenworth, Kan., as the automatic appeals process continues.

Given that background, those seeking to show Muslims in the best light don’t appreciate critics blaming Muslims for the Sikhs’ push for changes at the Pentagon. “This is all part of the Islamophobia industry,” says Ibrahim Hooper of the Council on American-Islamic Relations. “For them, any accommodation of Muslims in the military is going to lead to the overthrow of the Constitution and the imposition of sharia law.”

Of course, those blaming Muslims for the Pentagon’s recent change of heart aren’t the only ones guilty of mistaken identity. Ex-soldier and white supremacist Wade Michael Page shot and killed six Sikhs at a Wisconsin temple in 2012 before killing himself, apparently thinking his targets were Muslims. “Every time there is anti-Muslim sentiment in this country,” Kalsi told Time shortly afterward, “the Sikhs pay the price.” 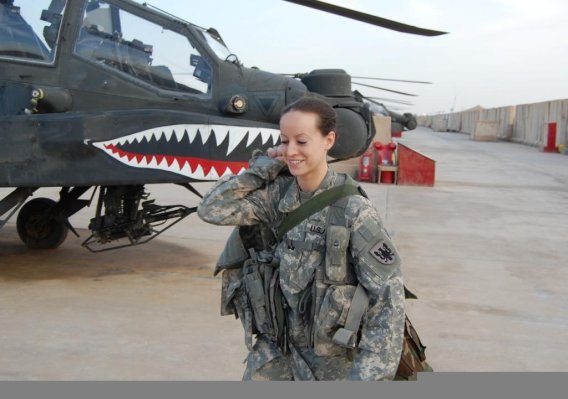 Army Women: Better Chopper Pilots Than the Guys?
Next Up: Editor's Pick