The second season finale of the hit series Vikings, which chronicles the rise and reign of one of the earliest known Viking leaders, Ragnar Lothbrok, airs tonight on The History Channel. Creator Michael Hirst and Travis Fimmel (who plays Lothbrok), spoke to TIME to prepare viewers for what — if prior experience is any indication — should be a bloody evening. Though Ragnar survived a resounding defeat in England during last week’s episode, he still faces threats at home, as you’ll see in an exclusive clip from tonight’s finale.

Here’s what Fimmel and Hirst had to say about Viking history, the show’s action sequences and the series with which it is often — if unfairly — compared:

On what drew them to the subject matter:

Hirst: In terms of what I wanted to do, I’ve always had these two central principles. One is that the show has to pay off at a visceral level, that it has to be exciting, that it has to tell people about Vikings, that it has to take people into the Viking world, that the battles have to be interesting and compelling, that the world has got to be organic and I want the audience be invested in the pagan gods as much as I’m invested in the pagan gods. But secondly, it’s a family saga. I mean, it’s rooted in human experience. It’s about a guy who has a wife and then a mistress and then a divorce, and then he’s had trouble with his boss, and then he’s the boss. Then he’s troubled being the boss. And that was something that I learned earlier on writing The Tudors because Showtime said, “Look, no one in America is really interested in Henry VIII. No one is really interested in watching shows about men in tights unless you can persuade the audience that the issues you’re dealing with are eternal and still viable and applicable.”

Fimmel: There’d been no show about Vikings that had been done really well, and Michael Hirst is mainly what attracted me to it, and I put myself on tape and sent it over there, and they were dumb enough to hire me.

On the historical aspects of the show:

Hirst: The Vikings have had a bad press because they didn’t write about themselves. They were written about by their enemies and by Christian monks who had a vested interest in dissing their gods and their behavior. Not to say they weren’t violent. It was a violent age. The Vikings’ gods were practical, but also mysterious and wonderful. And that was a big challenge for me because I’m not interested in fantasy. I don’t like fantasy. For me, fantasy is ultimately meaningless. I don’t mean it can’t be entertaining. Of course it can be really entertaining, but it doesn’t actually mean anything.

On the freedoms that the fairly limited Viking historiography provides:

Hirst: It’s been nice to have a bit more freedom, but I’m not actually inventing history. Everything starts with something that I’ve read or researched. I then have to — because it’s a drama, I then have to make drama out of the facts I know. But I’ll always come back at the end to something that I know happened or it’s supposed to have happened. And so it is — I’m glad to say it’s rooted in historical realities or what we think are historical realities. But nevertheless, ultimately it’s not a documentary. It’s a drama, you know.

Fimmel: You know, I prefer to stay in the dark and see what happens. Michael’s the captain of the ship and he’s a brilliant man, so I look forward to reading the scripts.

On comparisons with Game of Thrones:

Hirst: Game of Thrones is a very, very different show. It is a fantasy show, and it has a lot of things which are very appealing to an audience. It is soft porn, and it has a lot of gratuitous stuff in it, but it’s still very well-written and I don’t — you know, I don’t watch it because I don’t ever want to be accused of being influenced by it. But I know that millions of people watch it and it’s very popular, and the TV world is big enough to have lots of shows in it, and Game of Thrones is not the only other show that’s really, really good. And I have no problem with that.

On the nature of Ragnar Lothbrok:

Fimmel: The characters of Rollo [Ragnar’s brother] and Floki [Ragnar’s best friend] were already taken — I thought they were the more interesting characters, a lot more flawed and all that. But Michael knew sort of what I wanted, and I just wanted to make sure that Ragnar had a lot of flaws, and Michael was very available to that idea. I wanted an anti-hero more than a hero. I love that for Ragnar, it’s not about the treasure and all that stuff, it’s about helping out his people. He wants to do it his way for sure, he’s really there to just help out his people and hit a few people in the head with an axe along the way.

Hirst: Ragnar’s issues, his problems with his wife, his issues with his children, his love of his children, everything that he does is relatable. People don’t tend to go hundreds of miles in an open boat these days, but his curiosity for other places is universal, his difficulties with his marriage are universal. All those things I think make him human. In my very first outline of the show, Ragnar ldies at the end of Season 1. I was trying to interest people in the show. It was going to be very dramatic. Here’s the lead character and he dies and all that. And then his sons go on. But then you realize that in fact, this is the great thing about TV drama as opposed to movies, that the audience get invested, and you have great characters. And you can’t just write them off. You want to find out about them. Casting Travis was, well, partly lucky, but partly a great, great decision. And once Travis was up and running, and he was the most unlikely Viking leader ever. He was so deep and counterintuitive and thoughtful and not shouty and big and hairy. We wanted to spend more time with him, the audience wanted to spend more time with him.

On the show’s action sequences:

Hirst: Our actors really fight and they bleed and they get bruised and they go sailing and they’re horse riding. They do all the physical stuff that they don’t do on a lot of other shows.

Fimmel: I always enjoy doing that stuff, I haven’t been banged up. I’d rather do that than remember a page of lines. We’re always fighting in beautiful locations. The crews there are so talented and efficient, and always do an amazing job of getting the most out of the budget we have. It’s a stunning country to work in.

On the differences between the first and second seasons:

Hirst: And so you start the second season with more confidence, but also with higher expectations both of yourself and of the cast and of the show because you’ve established these characters. Then you want to take them into new places and different places. And you want them to grow. You want the characters to grow. You want the show to grow. It has to in some obvious senses be bigger and better. But the first season we could only afford to build two seaworthy boats because these things are pretty expensive. But this season, Season 2, we had eight boats, and we had a couple of thousand extras or whatever it was. So we were more ambitious about the storytelling, or at least about the look of it and opening it up and things.

Hirst: Blood eagling was something they did in extraordinary circumstances usually reserved for very special victims. I wanted to show it, but I didn’t want it to be gratuitous. I don’t think — we don’t have gratuitous sex in Vikings. I think a lot of shows now are basically soft porn shows. And we don’t have gratuitous violence. We have a lot of violence, but I like to think that we don’t show very much, you know, ripped throats and spurting blood. We have choreographed violence which in many ways is worse because what I like to do is to make people feel what it would be like to be inside a shield wall or be faced by such extreme worries and things.

On what to expect on tonight’s finale:

Hirst: I would say expect the unexpected, that all the way down the line perhaps what you think is true isn’t true. It’s true I think that Ragnar’s rise has been relatively comfortable. And I’m not surprised that some people around him are beginning to question it or beginning to — I totally understand Floki’s position, that everything has been for Ragnar and everyone has been Team Ragnar, and it doesn’t necessarily work in the long term and people have their own agendas and their own interests. And so there’s a lot of — I think that’s what makes this last episode interesting is how far these people are alienated and are willing to cross Ragnar and not totally believe in his myth.

Fimmel: A lot of unexpected stuff happens in Episode 10. I haven’t actually seen it, but the few people I’ve spoke with who have seen it are really happy with it and say it’s a great finale. And like any fan of the show, I’m looking forward to it. And you know, you’re not in every scene, so even though you get the script, you don’t know exactly what the other actors are doing, how they’re playing, so I’m looking forward to watching it.

On what the future holds for the show:

Hirst: In Season 3, I think we have to up the game again, and Season 3 will certainly feature a very famous event which was their first Viking attack on Paris that Ragnar led. It’s the most extraordinary episode. I’ve seen woodcuts. I mean, they’re later woodcuts of the siege. And there are hundreds of ladders that the Vikings are trying to get into the city. And all this is recorded actually. I’ve just been reading the history of it. And so again, we’re moving from we had two ships Season 1, we had eight ships Season 2, we’ve got over 100 ships in Season 3. And we’re going to attack Paris. So it’s fantastic. I thought that it was reasonably clever to focus on a central character who had lots of sons. So, I therefore hoped that if things worked, that we could do Ragnar and then we could do the sons because one of the sons, for example, Bjorn, sails around the Mediterranean. I mean, they attack what they think is Rome. They go to Spain. They do extraordinary things. I was always optimistic that we could go forward. But on the other hand, you never know. 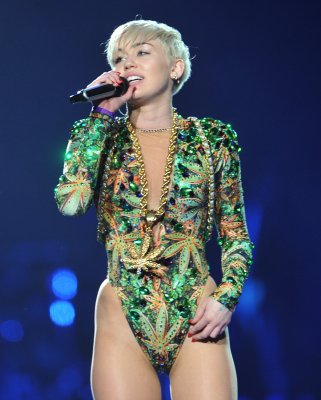 Miley Cyrus Tour Delayed After Another Allergy Attack
Next Up: Editor's Pick