Today, the Internet is at its most powerful: Online chatter now has the power to change what’s included in the Bible. Or, rather, The Bible.

Here’s what happened: Remember last March, when History Channel’s The Bible miniseries was a huge hit but everyone was really worked up because the actor who played Satan seemed to resemble President Barack Obama? Well, if you missed the original uproar, you won’t get a do-over when the movie version, Son of God, hits theaters on Feb. 28. That’s because The Bible‘s producers, Roma Downey and Mark Burnett, cut the miniseries down to 138 minutes for its theatrical run — and in doing so they removed Satan entirely.

And, as Downey explained last night in a first-person piece in USA Today, the reason for doing so was all about the controversy, even though the producers called the comparison “nonsense” when it first made news:

So the decision was made to focus the movie on its title character, leaving the devil “on the cutting room floor.” The debate over whether there was any meaning behind the Satan casting choice? Proof that the Internet can be a tool of the devil, clearly.

(MORE: Behind the Hit Bible Miniseries: The Man Who Helps Hollywood Get Religion)

But whether or not you think there’s actually some evil power determining which stories trend (and, let’s be honest, sometimes it does seem like that’s the only explanation), the Bible-to-Son of God transition is an undeniable demonstration of the power of the online echo chamber. The people who make the content are listening to the commentary and, in cases like this, making decisions based entirely on what the viewers are saying. TV creators choosing to add or remove characters based on fan response isn’t new; nor is political or religious controversy about something on a TV show. Here, however, is an intersection of the two: the people in charge decided to cut a character because of “nonsense” online controversy, not because of the lack of fan engagement that usually earns characters the axe. In that way, it’s a closer parallel to Phil Robertson’s suspension from Duck Dynasty — except that those producers didn’t say that controversy was silly — than it is to Lost dispensing with Nikki and Paulo, the consensus winners for worst characters ever.

After all, we’re talking about Satan here. It’s not as if Downey and Burnett are responsible for thus source material; he’s a pretty integral part of the story they’re telling. But apparently, after centuries of Christians believing that Jesus was tempted by the devil, online hubbub is enough for folks making multiple miniseries about the Bible to decide that part of the story isn’t worth the trouble.

Downey and Burnett are also working on a Bible sequel miniseries for NBC, A.D., due in about a year. The series will focus on the aftermath of the crucifixion among Jesus’ friends and the political and religious powers of the time — but there’s no word yet on whether that group will include a certain bad guy.

(MORE: Devil in the Details: The Real Problem With History Channel’s Satan) 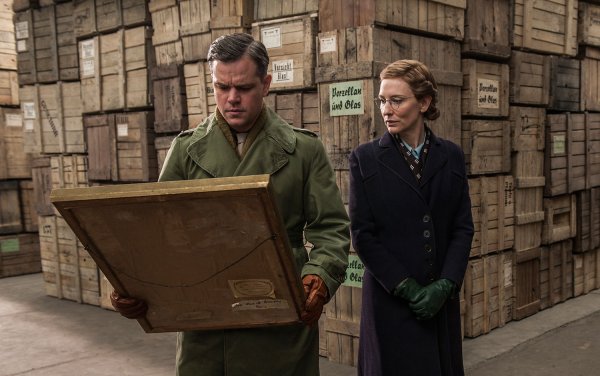 The Monuments Men and Questions That Can't Be Answered
Next Up: Editor's Pick