Craft beer’s growth in the U.S. has been amazing, rising from 11.5 million barrels brewed in 2011 to over 15 million barrels in 2013. Over that same time span, however, production of another traditional American brew has tripled.

We’re talking about the rise of hard cider. The growth of cider—or rather, the comeback, since cider was America’s beverage of choice during colonial times—has been in the works for years, hitting an especially hot streak recently. Big brewers such as Anheuser-Busch, MillerCoors, and the Boston Beer Company (maker of Samuel Adams) have taken notice and joined in the trend, introducing cider brands of their own, complete with broad marketing campaigns for beverages that are sweeter and more gender-neutral than beer.

Interest in cider has piggybacked on both the craft beer and foodie trends, in which a sizeable swath of consumers devotes a considerable amount of time, effort, and dollars to regularly seeking out new, interesting, typically local flavors. The popularity of cider in the U.S. also follows in the footsteps of the market in Europe. A little less than a decade ago, cider “suddenly became the most fashionable drink in England,” Ed Gibson, an Englishman who now runs Austin Eastciders in Texas, recalled to the Fort Worth Star Telegram. “Everybody was drinking it – all the pop stars, celebrities and the cool kids. It went through a renaissance at that time and now it’s about 15 percent of the beer market in England.”

Cider’s share of the market is considerably smaller in the U.S.—maybe 1%. But sales have soared of late, up nearly 100% in one recent 52-week period. Data cited in an Oregonian story about the rising popularity of cider in the U.S.—and in particular, in Oregon—indicates that American hard cider production more than tripled from 2011 to 2013, from 9.4 million gallons to 32 million gallons.

And, unsurprisingly, there’s nowhere better to this trend in action but in trendy Portland. Portland not only says it has more breweries than any other city on earth (53 and counting), it is now claiming to be the “worldwide epicenter for cider.” That’s the phrase used by Jeff Smith, co-owner of what he says is America’s first boutique cider-only bar, Bushwacker Cider, located in southeast Portland. The place offers nearly 300 varieties of cider, and Smith told the Oregonian that consumers are drawn to the not-bitter beverage for the simplest of reasons: “It’s not as complicated as beer. You basically get an apple and crush it. It’s branch to bottle. People see that.”

Even as cider has been enjoying a sharp rise in sales, cider makers expect much bigger things down the road. During the past two CiderCONs, held since 2011 in Chicago, researchers surveyed more than 100 cider producers, and the vast majority projected strong growth for their companies over the next five years. A 2012 Nielsen report, meanwhile, stated that the “relatively small Cider segment is poised for great growth,” in part because ciders “attract a younger, more affluent consumer.” 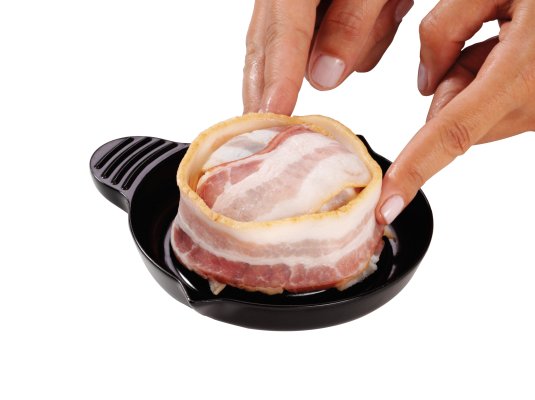 The Perfect Bacon Bowl Is Totally the Next Snuggie
Next Up: Editor's Pick