An anti-government protester stands next to a defaced image of Thailand's Prime Minister Yingluck Shinawatra during a rally near the Government Complex in Bangkok Feb. 18, 2014
Chaiwat Subprasom—Reuters
By David Stout

Thailand’s National Anti-Corruption Commission (NACC) on Tuesday told embattled Prime Minister Yingluck Shinawatra that there is sufficient evidence to charge her with abuse of power and maleficence.

The move is arguably the strongest challenge yet to her leadership, and comes just as clashes between antigovernment protesters and police claimed five lives and injured 66 on the streets of Bangkok.

“[The NACC] have been very slow, very careful in trying to put evidence together,” said Paul Chambers, director of research at the Institute of Southeast Asian Affairs at Thailand’s Chiang Mai University.

MORE: How Thailand’s Botched Rice Scheme Blew a Big Hole in its Economy

The charges stem from one of the Yingluck administration’s landmark pieces of legislation that pledged to pay farmers significantly above market prices for their crop, regardless of quality. The policy has been a disaster economically for the country — losses are estimated at $6 billion annually since 2011 — and recently sapped support for her Pheu Thai Party, which relies on the massive electoral backing from rural provinces in the rice-farming north and northeast.

Thailand’s Bank of Agriculture and Agriculture Cooperatives has been unable to pay farmers since September, which has resulted in many heading to Bangkok to join the continuing protests against Yingluck’s administration.

During a speech on Tuesday, Yingluck said anti-government protesters were manipulating the farmers to join their ranks. “The farmers are now in the middle of a political game being played by the protest leaders, who are refusing to follow the democratic and legal path,” said Thailand’s first female prime minister, adding that she was “very upset” by the delay to rice payments.

Vicha Mahakhun, a member of the NACC, issued a statement Wednesday that cited Yingluck’s obstinate backing of the scheme, despite a raft of objections, as evidence of “her intention to cause losses to the government.”

The People’s Democratic Reform Committee (PDRC) first took to the streets to protest an amnesty bill that would have allowed former Prime Minister Thaksin Shinawatra, Yingluck’s brother, to return to Thailand. Despite the legislation being shelved after widespread public outrage, the PDRC has refused to leave the streets until all traces of the Shinawatra clan are purged from politics and expelled from the country.

“[The rice scheme] was really a blessing in disguise for people who hate Thaksin,” says Chambers, referring to how Yingluck’s rural voting block has now been split.

Following disrupted snap elections on Feb. 2, Thailand remains in limbo without a functioning legislative branch. Yingluck’s caretaker government is unable to pass a budget or allocate appropriate funds to state programs. This includes the ill-fated rice scheme, which will now close on Feb. 28 as Yingluck lacks the authority to extend it further.

After formally presenting the charges to Yingluck on Feb. 27, the prime minister must decide whether to fight the charges in court or negotiate some sort of deal to exit the political scene. If found guilty, she would be forced to resign and barred from politics for five years.

Thaksin was charged under similar corruption statutes and sentenced to two years in prison in 2008; however, he had fled the country and currently resides in Dubai. The NACC is widely perceived as an elitist organ that favors traditional vestiges of power such as the the monarchy and military, and so, by extension, the PDRC.

“It’s hard to see Yingluck emerging from her current state of affairs, much less what they might look like tomorrow, in one piece politically — that is to say as Prime Minister,” Benjamin Zawacki, a lawyer and independent scholar based in Bangkok, tells TIME. “I’d say her days are numbered.”

MORE: The Nightmare Gets Worse For Embattled Thai PM Yingluck 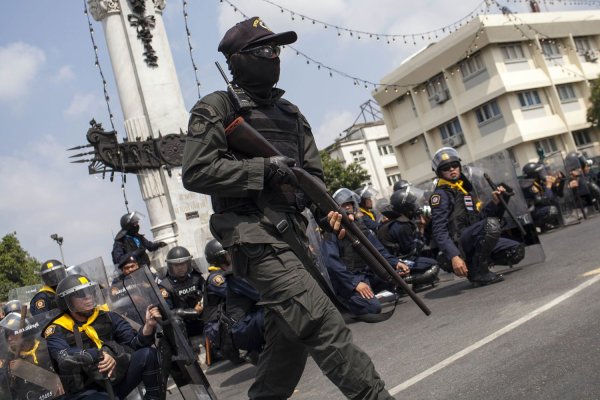 Death and Violence as Riots Grip Bangkok
Next Up: Editor's Pick