Oklahoma Wonders Why The Earth Is Shaking

Deckhands on a Sandridge Energy oil rig change out a drill pipe in a fracking operation on the Oklahoma border in Harper County, Kan., in February 2012. A 3.8-magnitude quake in the area on December 16, 2013, rattled windows, cracked walls and shook furniture.
Bo Rader—MCT/Getty Images
By Denver Nicks

No strangers to nature’s fury, Oklahomans grow up accustomed scorching heat, blizzards, wrecking-ball thunderstorms and tornadoes. What they don’t see a lot of are earthquakes, which have been rattling the Sooner State with rare frequency of late — at least 115 earthquakes of varying intensities in the last week.

“You hear a loud ‘WAM!’ and you hear this loud rattle-rattle-rattle,” said Tracey Romberger, who lives near the center of this latest swarm of earthquakes between Oklahoma City and the town of Guthrie. She described the sound as “like somebody was dropping a bomb, or a cannon going off.”

The question on everyone’s mind is: why? The area has been seismically active since time immemorial but the latest swarm of earthquakes is unheard of. According to earthquake monitors EQ Charts, between 1990 and 2008 there were between 0 and 11 earthquakes of magnitude 2.0 or greater in Oklahoma every year. In 2009 there were 49. In 2010 there were 180. In 2013 there were 291, and so far in 2014 there have been 59-plus and counting. More than a dozen notable earthquakes have shaken north-central Oklahoma in the past three days.

“It’s incredibly unusual,” said Austin Holland, a research seismologist with the Oklahoma Geologic Survey. “We’ve had swarms that are similar in nature but I don’t think we’ve had one with quite the numbers we’ve had.”

State authorities are now trying to get the bottom of the unusual seismic activity. Holland is amassing resources and data to figure out what might be to blame, and the Oklahoma Corporation Commission, which oversees the oil and gas industry, has already proposed new testing and monitoring requirements for wells injected with drilling wastewater, which some have blamed for the increase in earthquakes. Hydraulic fracturing, or “fracking“, involving explosions being set off underground, has also been blamed by some for the swarm.

Spent drilling water injected back into the ground for storage at high pressure, some scientists believe, may be forcing fault lines under pressure to shift. Katie Keranen, a geophysics professor at Cornell, says “the evidence is strong” that the earthquakes are caused by fracking and wastewater disposal, both of which have become more frequent amid today’s boom in oil and gas drilling.

But others scoff at the notion that fracking might be connected to seismic activity. “I work with geologists and petroleum engineers on a daily basis and they are of the opinion that [fracking] is not causing the earthquakes,” said Eric King, an attorney who works with the oil and gas industry, comparing the earthquake swarm to climate fluctuations. “We didn’t have cold weather in Oklahoma for a lot of years but we’re having it this year,” he said.

It’s true that Oklahoma has a history of earthquake swarms that spike and then die down, but it’s also true that humans have caused earthquakes in the past. And previous swarms have been nowhere near as serious as this latest one. “We do know there have been some earthquakes caused by oil and gas activity in the state,” Holland, the research seismologist, said. “The hard part is figuring out which is which.”

In the meantime, Oklahoma is steeling itself for worse quakes in the future, as each earthquake increases the likelihood that a worse earthquake will follow. That’s a prospect that could put Oklahomans on edge. “It scares you a little bit,” says Romberger. “Makes you jump.” 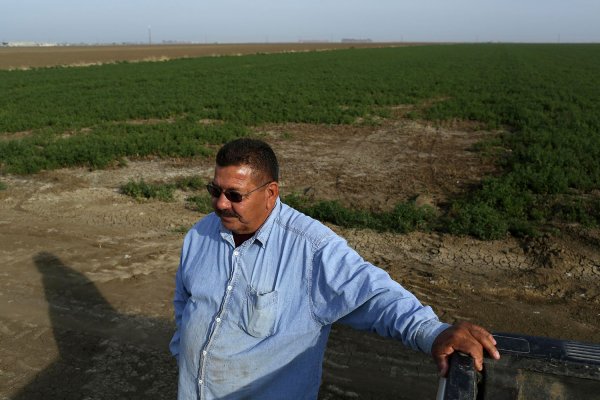 No End For Calif. Droughts
Next Up: Editor's Pick