Tornado season began with a crash in the southeastern U.S. this week, where dozens of twisters ripped across Mississippi, Arkansas and Alabama. At least 29 people have died in the storms — and with more tornadoes forecast as the weather system moves further east, that number will almost certainly rise.

It’s the suddenness of tornadoes, as much as their power, that accounts for the lives they take. Meteorologists can forecast when and where storms that can produce tornadoes will appear, but they can rarely give residents more than 15 minutes of warning before a twister touches down. Unlike hurricanes, which meteorologists can now track days in advance with increasing precision, tornadoes remain stubbornly unpredictable, although forecasters at the National Oceanic and Atmospheric Administration (NOAA) are working on ways to extend that warning time.

That unpredictability also makes it harder to assess the destructive power of a tornado in real time. Hurricane categories are based on sustained wind speeds in a storm—a Category 1 storm would have sustained winds 74-95 mph (119-153 kph), while a Category 5 storm would have sustained winds of over 157 mph (252 kmh) (“Sustained wind speeds” means the average wind speed in a storm over 10 minutes). The damage a hurricane can cause doesn’t always conform completely to categories. Superstorm Sandy, for instance, wasn’t even a Category 1 hurricane by the time it made landfall in New Jersey, but still caused more than $60 billion in damage, largely due to the size of its storm surge. But more wind generally means more danger—just ask the people of New Orleans, hit by Category 5 Hurricane Katrina in 2005.

Tornado strength is assessed on a different and slower scale, after the twisters have struck. When tornadoes occur, National Weather Service (NWS) officials are dispatched to survey the damage. They also reconstruct tornadoes’ life cycles, where they touched down—and how strong they were. Tornadoes are ranked on the Enhanced Fujita (EF) Scale, developed by a Japanese-American meteorologist who, not coincidentally, got his start studying the damage caused by the atomic bomb in Hiroshima. The original Fujita scale was based primarily on the damage a tornado did, with wind speed estimated after the fact. The scale ranked tornadoes from a F0 (Gale) to an F5 (Incredible), with an unofficial F6 category that would require winds in excess of 318 mph and which goes by the name Inconceivable—accurate, since no F6 tornadoes have ever been recorded.

The Enhanced Fujita scale was adopted in 2007. It was designed to more accurately reflect the actual damage a tornado had done on the ground. The EF scale uses 28 different damage indicators, ranging from small barns to hardwood trees to shopping malls—and each of those indicators is assessed based on several different points of possible damage. A shopping mall could range from damage that is just barely visible to complete destruction of some or all of the building. There’s a large database of how strong a tornado needs to be to cause certain kinds of structural damage, so meteorologists are able to use the final damage report to go back and estimate the tornado’s wind speed at the time of touchdown. The categories range from EF0—with three-second wind gusts of 65-85 mph (104-137 kph)—to EF5, with three second gusts over 200 mph (321 kph).

We won’t know the full strength of this week’s multiple tornadoes until NWS surveyors have had a chance to measure the damage on-site. But there has already been a pair of EF3 twisters this year, striking Arkansas and North Carolina on Apr. 27, and those tornadoes may be upgraded as full damage assessments are carried out. 2014 had been shaping up to be a quiet year for tornadoes—Apr. 27 marked the end of a string of 159 days without an EF3 or above tornado, and there had been only 93 tornado reports this year through Apr. 24. That changed this week—there were 87 tornado reports on Apr. 28 alone. And while no tornado that’s hit yet looks to be as strong as the EF5 twister that devastated Moore, Oklahoma last year, the season is far from done. 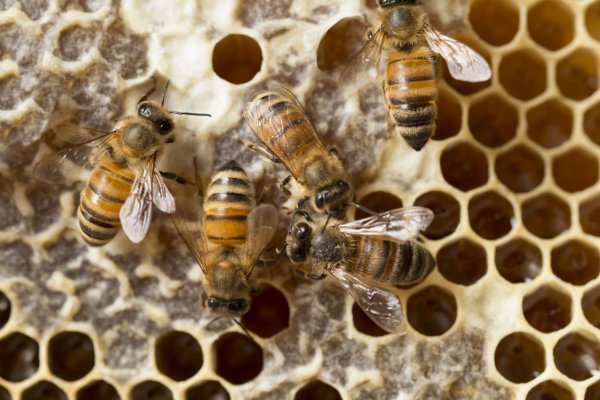 It's Hard Out There for a Honeybee
Next Up: Editor's Pick