What’s the diameter of an atom, precisely? How do you describe something you can’t see with a light microscope? Is the term “diameter” even the right one to describe an atom’s size? Don’t atoms change over time?

They do, sometimes varying significantly, and so there’s no standard number that describes the atomic distances, strictly speaking, of one of matter’s building blocks. We settle instead for measuring the distance between two adjacent atomic nuclei, dividing that number by two, and calling it close enough: the approximation typically comes in around 1 x 10-10 meters, which is an incredibly small figure.

So imagine someone taking a beam of electrons — one of three subatomic particles, the other two being protons and neutrons, that comprise a single atom — and using it to craft strands of bendable metallic wire only three atoms wide — roughly one-thousandth as wide as the wires used to link transistors in modern integrated circuits. If you scaled that three-atom wire up to its size in blueberries, imagine how big your transistors would have to be.

The wizard behind the process is a fellow named Junhao Lin, a Vanderbilt University Ph.D. graduate student and visiting scientist at Oak Ridge National Laboratory (ORNL), whose feat was just published in the journal Nature Nanotechnology.

“Junhao used a scanning transmission electron microscope (STEM) that is capable of focusing a beam of electrons down to a width of half an angstrom (about half the size of an atom) and aims this beam with exquisite precision,” said Lin’s ORNL mentor, Wu Zhou (via Vanderbilt News), adding “This will likely stimulate a huge research interest in monolayer circuit design. Because this technique uses electron irradiation, it can in principle be applicable to any kind of electron-based instrument, such as electron-beam lithography.”

In other words, Lin’s three-atom nanoscale wire could be used to craft paper-thin electronic components that could in turn lead to much smaller and thinner mobile electronics, to say nothing of its potential to improve wearable or even biologically embedded tech. The following video is actual footage of the strand taken with an electron microscope. 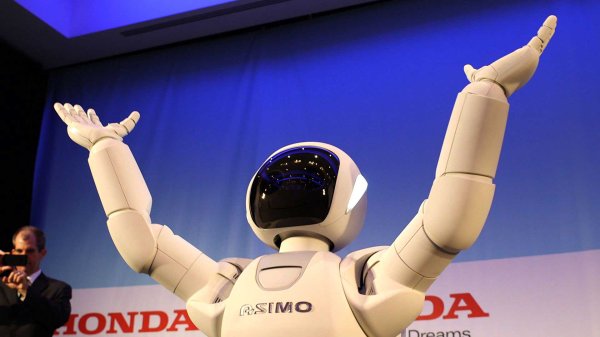 Smooth Moves: The Evolution of Honda's ASIMO Robot
Next Up: Editor's Pick