Secretary of Defense Chuck Hagel received “assurance” from his Russian counterpart, Sergei Shoygu, on Monday that the Kremlin would not send troops amassed on its western border with Ukraine, where separatist forces have called for Moscow’s assistance.

“Minister Shoygu reiterated his assurance that Russian forces would not invade Ukraine,” read a statement by the Department of Defense. “Sec. Hagel emphasized how dangerous the situation remains and expressed his desire to find a responsible way forward.”

Hagel also appealed to Shoygu to help secure the release of seven observers from the Organization for Security and Co-operation in Europe (OSCE) held by separatist militants in eastern Ukraine.

Russia’s ambassador to the Vienna-based OSCE, Andrei Kelin, on Monday agreed that it would be a “good step” to release the observers but chastised the organization for being “extremely irresponsible” by sending military monitors to the restive borderlands.

“People [are] expecting an aggression … every moment, so it is extremely tense. That is why it was extremely irresponsible to direct [monitors] to this region in this tense situation,” Kelin said after a closed-door OSCE meeting, according to Reuters. It was “quite an adventure or provocation … to bring these people to a hot spot.”

Eight OSCE observers were detained by separatist forces last week and paraded in front of the media on Sunday. One Swedish team member was released later that same day; however, insurgents in rebel-held Slavyansk demanded that the remaining seven be swapped for jailed “activists” held by Kiev.

Eastern Ukraine remained tense on Monday after pro-Russian forces wielding baseballs bats, pipes and stun grenades attacked pro-Ukraine supporters in the separatist-held city of Donetsk. More than 2,000 people had been rallying in support of a united Ukraine in the rebel stronghold. At least 20 people were injured, 10 of whom were hospitalized, after being set upon by the mob. 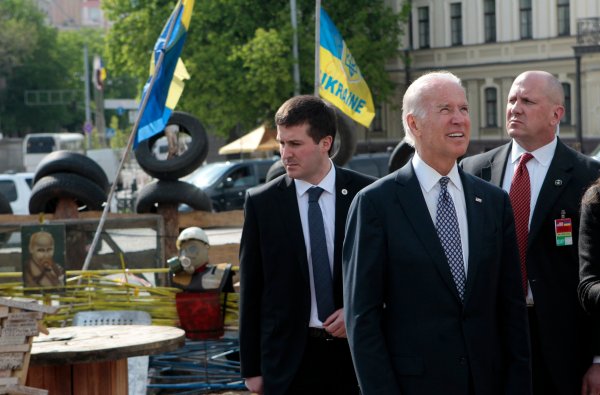 U.S. Knocks on Russia's Door
Next Up: Editor's Pick