Mac and Cheese. That’s what their first coach called them, mainly because Alex Shibutani had a habit of turning to the judges and flashing an exuberant grin, even if it meant not looking where he was going.

He’s still a bit of a ham, but now those smiles will be directed at the Olympic judges in Sochi. It’s been a long journey for Alex and his sister Maia, one of seven sibling sets competing for the U.S. at the Games, and it’s an odyssey that they’ve taken as a family.

It was Maia who started skating first, seeing it as the perfect way to express what she heard, every day at home, in music. Parents Naomi and Chris Shibutani, both former competitive musicians (she’s a pianist, he’s a flutist), always had some kind of music playing when the family was getting ready for dinner at their home, first in Boston, then in Connecticut – classical, jazz, contemporary, it didn’t matter.

After Maia learned to skate at birthday parties, she took to freestyling on the ice to lengthy CDs that Naomi put together for her. An early favorite was Prokofiev’s Romeo and Juliet score; tiny six-year-old Maia would think nothing of skating for 20 minutes straight to the soaring music, making everything up as she went. “People who saw her would ask, ‘Who choreographed a 20-minute program for a six-year-old?’” says Chris.

For Maia, the Olympics very quickly became a goal. As soon as she could understand what the Olympics were, says Chris, she worked out when she would be old enough to compete. 2014 became the magic number. “Everything has been to pursue this dream for them,” says Naomi. “To the point that email passwords involved the number 2014.”

Soon after Maia started skating, older brother Alex did too, at first just tagging along to the rinks in Greenwich, New York and New Jersey, wherever there were coaches and ice time available. Alex entertained himself with homework or by fishing for lost change behind the skate benches. At the time, he was obsessed with Michael Jordan and basketball, and papered his bedroom walls with posters and baskets so he could practice dunks, not forgetting Jordan’s trademark tongue hanging to the side of his mouth as he grabbed some air. But given the choice between homework and skating, not surprisingly, he chose the latter, and joined Maia as a singles skater.

MORE: Lessons from The Team Event: Why It’s Tough to Be a Skater If You’re Not From Russia

It wasn’t until Alex had to pick up a team sport for his school PE requirement that Naomi thought of putting them together as a dance team. “[Their coach] said as long as they could hold hands and not kill each other, they could try it,” says Chris.

They giggled, thought it was fun and funny, and within a few months were catching the eye of Susan Kelley and Andrew Stroukoff, who competed for the U.S. in the first Olympic ice dance competition in 1976. Kelley thought the brother-sister duo could finish in the top five at juvenile nationals that year.

Apparently, he had an eye for talent. The Shibutani siblings, known as the Shib Sibs, finished second.

By then, the Maia and Alex were taking lessons from Slavka Kohout, a legendary figure skating coach who trained five-time U.S. national champion Janet Lynn. Lynn, thanks to Kohout’s meticulous focus on basic skills and strong edges, was known as a technically precise skater, and that same attention to the blade helped the Shibutanis to stand apart from their peers.

“It was all about the fundamentals of skating, and learning the edges,” says Naomi.

As elite musicians who traveled for competitions, and understood the value of experiencing great talent in person, she and Chris took their children to elite level skating competitions whenever they could. When the world championships came to Washington, D.C., the family had rink side seats. “We were right by the ice, and we felt all the teams skating around and creating this vortex of wind as they went by,” says Alex. “That was so impressive for us, being nine and 12.”

After a practice session at the event, the siblings had their first encounter with Tanith Belbin and Ben Agosto, then an up-and-coming U.S. dance team who finished fifth at the competition and would go on to earn the U.S.’ first Olympic medal, a silver, in 20 years at the 2006 Games. “They were our idols; we got their autographs at that competition, and they were so friendly. I’m sure they had places to go, and people to see and a competition to prepare for, but they made themselves readily available to two young kids,” says Alex.

As the siblings’ talent became obvious, their coach suggested they take advantage of summer development camps at the Broadmoor World Arena in Colorado Springs, a skating training mecca, particularly for novice and junior skaters. “The first time we got to the World Arena, their eyes went wide,” says Chris. There, in one chilly arena, was everything Maia and Alex wanted – top level coaches, including Olympic ice dance champion Christopher Dean, elite competitors, and tons and tons of ice time.

For Chris and Naomi, however, it meant an end to their own dream. The couple had just purchased a home in Greenwich, the one in which they planned on spending the rest of their lives. “This was the house they Maia and Alex were going to come home to during Thanksgiving break from college, and we were going to live in for 30 years, just like our parents did in their generation,” says Chris.

But when their children started beating ice dance teams that had won at nationals the year before, the Shibutanis knew that Colorado Springs was where they had to be to realize their potential. They sold the house, and Chris, an anesthesiologist who earned a business degree and was then working at JPMorgan in New York; started catching JetBlue flights out of JFK Airport on Thursdays; flying to Denver; driving an hour-and-a-half; spending the weekend with the family; and flying back on Sunday. “I was a regular at JFK,” he says of the weekly trips he took for two years. “There something wonderful and pathetic about being recognized at JetBlue, Starbucks and the rental car agency.”

When the Shib sibs’ talent outgrew Colorado Springs, they auditioned in 2007 for coaches Igor Shpilband and Marina Zoueva at the Arctic Ice Arena in Canton, Michigan. Shpilband had put together Belbin and Agosto, and with Zoueva was attracting the top ice dance teams from around the world, including reigning Olympic gold and silver medalists, Tessa Virtue and Scott Moir from Canada, and Meryl Davis and Charlie White of the U.S. “They are very unique, super unique,” says Zoueva of the brother-sister pair. “The way they feel the music, they feel it with their body and soul, and they can express what they feel.”

As brother and sister, they also have an uncanny unison that earns points from the judges. At their first senior world championships, in 2011, they shot straight to the podium, earning a bronze.

This season, they intentionally chose to skate to a medley of Michael Jackson hits for their free dance, in an effort to attract younger fans to ice dance. “People have stereotypes of turning on the television and watching figure skating – ‘oh, it’s going to be something to opera, or some music I don’t really connect with,’” says Alex. “We are trying to connect with the person who is turning on the TV, didn’t know there was figure skating on, and trying to get them to stay on that channel.”

To prepare their Jackson tribute, they flew to Los Angeles to work with Jackson’s choreographers Travis Payne and Stacy Walker, and result is a routine that never fails to get audiences dancing along with them.

Training at the same rink with the top teams in the world is also a huge motivator for the Shibutanis. “We see it as a competitive advantage for us to train with them,” says Maia of their practice sessions on the ice, which are more like the warmups for the world championships.

While the siblings were first a bit awestruck by training with these teams – they stuck to a small corner of the rink at their first practice until Moir came over and told them that they had as much right to the full ice as the world and Olympic champs – Maia and Alex can now quick step, foxtrot and moon dance with the best of them, and represent the bright future of American ice dance. 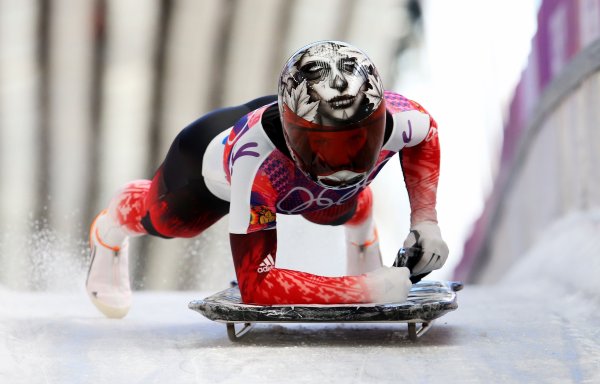 Must-see Photos from Day 9 of the Sochi Olympics
Next Up: Editor's Pick