How the 'World of Tomorrow' Became a Thing of the Past

What happened to the World’s Fair? On April 30th, which marks the 75th anniversary of the 1939 World’s Fair in Flushing Meadows, the question becomes especially poignant. How did the global cultural events that inaugurated broadcast television (New York 1939), built the Eiffel Tower (Paris 1889), and introduced the world to the Ferris Wheel (Chicago 1893) disappear?

The next World’s Fair is scheduled for Spring 2015 in Milan Italy, but expo-goers who are looking to catch the latest glimpse at the “world of tomorrow,” will be disappointed. “A lot of Americans imagine World’s Fairs as they were in the 1930s and the 1960s, but the medium has changed,” says World’s Fair consultant Urso Chappell. “Whereas the focus was on progress or the space age and things like that at one time, the themes tend to be more environmental now,” he adds.

With smaller scope and a concentration on solving problems rather than trumpeting triumphs, World’s Fairs just don’t capture the imagination like they used to. Milan’s theme — Feeding the planet, energy for life — focuses on ending hunger and developing food sustainability. By contrast, the 1939 World’s Fair’s Dawn of a New Day slogan exuded aspirational wonder and 1964’s (which had its 50th anniversary last week), centered on Peace Through Understanding.

Then there’s the problem of proximity. There hasn’t been a World’s Fair in North America since 1986 in Vancouver. During the Fairs’ heydays, wealthy and middle class families would make pilgrimages across the seas to meccas of modernization to see the wonders firsthand, but the internet put an end to that. “I don’t know today how a World’s Fair can be viable, because everybody has a camera in their pocket,” says Louise Weinberg, World’s Fair Archive Manager at the Queens Museum. A quick search on your phone has replaced an expensive trip to a foreign country.

Cost plays a significant role too. Unlike the Olympics, which occasionally have made money for their host cities, there’s no profit from hosting a Fair. “Running a Fair is a losing proposition, you don’t do it to make money” says Weinberg.

Prestige was the prime motivator for hosting Worlds Fairs. Some of New York’s most prominent political figures like Robert Moses, Fiorello LaGuardia and Grover Whalen performed Herculean feats (and spent gobs of money) in order to bring the two Fairs to New York. Now the U.S. leaves the bidding to developing or resurgent countries looking to impress the rest of the world.

But while the U.S hash’t hosted a Fair in decades, it’s still participating in them. Barack Obama announced more than a year in advance that America will participate in Milan’s Expo in 2015, and U.S. cities are already bidding to host ones much further out. “There’s groups in Minneapolis looking to [host the Worlds Fair in] 2023, there’s groups in San Francisco and Houston looking at 2025, so hopefully we will see a World’s Fair in North America sometime soon,” says World’s Fair consultant Chappell. To avoid slipping from “the world of tomorrow” to “the world of the past,” the new U.S. Fairs will have to harken back to the old New York Fairs’ sense of wonder and aspiration. 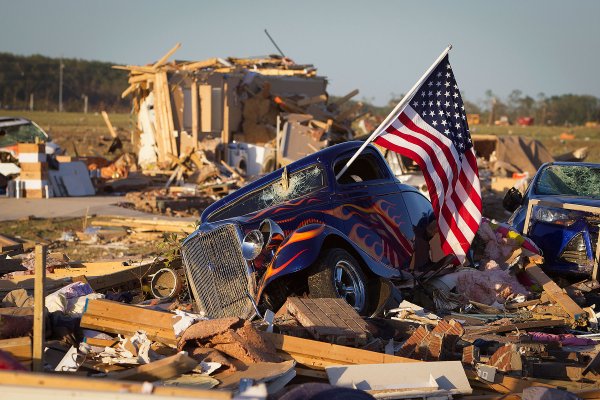 Tornadoes Tear Through South
Next Up: Editor's Pick