Since launching on the Chinese video-hosting website Sohu TV in 2009, The Big Bang Theory has racked up 1.3 billion views — equivalent to one view for every person in the country
CBS/Getty Images
By Chengcheng Jiang / Beijing

You could call it the Big Ban Theory. Chinese fans of American TV series are up in arms after discovering that some of their favorite shows have been yanked from the country’s most popular streaming websites without explanation. On Saturday, The Big Bang Theory, The Good Wife, NCIS and The Practice all disappeared from sites like Sohu TV, iQiyi and Youku.

At this stage it’s unclear why the government has targeted The Big Bang Theory, a seemingly innocuous show about the personal relationships and travails of a group of science geeks, while far more contentious programs like Breaking Bad and House of Cards continue to be broadcast online.

One reason could be its popularity. Since launching on the video-hosting website Sohu TV in 2009, The Big Bang Theory has racked up 1.3 billion views — equivalent to one view for every person in the country.

There is little doubt that the edict pulling the shows seems intended as a shot across the boughs of China’s freewheeling online video sector by government regulators. Until now, video providers like Sohu TV and iQiyi have been free to negotiate content deals with overseas rights holders and broadcast the shows they like without having to get official approval.

As a result, young viewers have been deserting the sanitized soap operas and turgid dramas about the communist revolution that are a staple of mainstream, government-controlled TV and are flocking to the more uninhibited realms of online TV. But the government has long indicated that it would clamp down on this unusually open media sector. Last month, the State Administration of Press, Publication, Radio, Film and Television said that all American and British TV shows being broadcast in China would need to receive government approval — which would require them to come before the censors. The move to ban certain shows is, it would seem, the first move in rolling out this approval process.

The development comes as the Chinese government is strengthening its control over the Internet. Officials have repeatedly spoken of the importance of “seizing the commanding heights” of the web. The administration of Xi Jinping has already sanitized popular social-media platforms like microblogging site Weibo and strengthened control over online media organizations.

The Global Times, a normally staunchly nationalistic publication, published Monday a piece written by leading film critic Tan Fei, who argued that “the machetes the monitoring departments waved to the U.S. dramas are not only aimed at protecting teenagers’ physical and mental health but, on a deeper level, are aimed at protecting our weak domestic film industry.”

The decision to pull The Big Bang Theory, a hugely popular comedy, has rankled the show’s army of fans in China, where the story of nerdy graduates struggling to find their way in the world has struck a chord with millions of young people. With the job market in China becoming fiercely competitive and living costs soaring across major cities, graduates are now finding that their dreams of a career and high income don’t necessarily translate into reality.

Fans have taken to online forums to voice their approval for the show and to offer creative arguments for its return.

Wrote one user sardonically: “The Big Bang Theory described four young scientists who can’t find wives because they’re devoted to science, they can’t buy a house so they shared a small apartment and live on junk food, and the Indian immigrant with speech problems has to sit on the floor to eat. All these miserable phenomena highlight the racism, the unfairness and decadence of Western society. It’s an extremely strong educational tool for those in China who wish to emigrate.”

The pleas may be working, however. According to fresh reports in Chinese media, the state broadcaster CCTV has bought the rights and will broadcast The Big Bang Theory in the near future — but in how sanitized a form it remains to be seen. 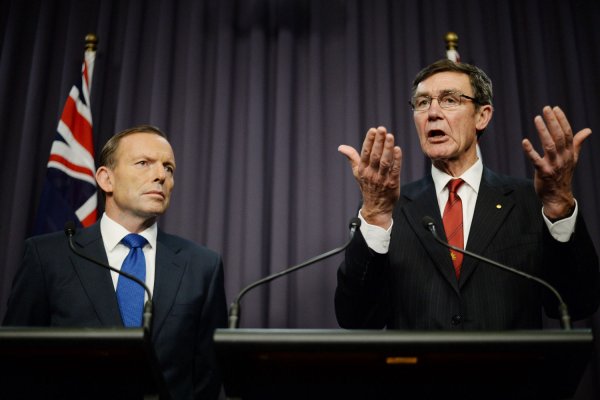 Australian PM: We'll Do 'Everything' to Find Missing Jet
Next Up: Editor's Pick