The Clippers Should Have Boycotted Game After Owner's Racist Remarks

After TMZ released audio of what was purportedly Los Angeles Clippers owner Donald Sterling making racist comments to his girlfriend, his team was scheduled to play a basketball game on Sunday. The circumstances — following wide attention to the audio in which Sterling is depicted admonishing her for associating with African Americans in public, including Magic Johnson — were unprecedented. The players, most of whom are black, had to represent an owner whose allegedly racist views — the team kinda, sorta questioned the authenticity of the audio — were now broadcast to the world. Even President Barack Obama, on the other side of the globe in Malaysia, admonished Sterling for his “incredibly offensive racist statements.”

The Golden State Warriors, to no one’s surprise, crushed the distracted Clippers, 118-97, to tie their best-of-seven playoff series at 2-2. “Watching that game, you just saw the lack of effort,” says former Clipper Marques Johnson, who played for Sterling’s team for three seasons in the mid-1980s, and is now a basketball analyst for Fox Sports Net. “Guys were slow on the defensive rotations. To the trained eye, there was a stuff out there you could see. Trust me, they played, but they really didn’t.”

The Clippers could have done themselves, and the country, a huge favor on Sunday afternoon, and boycotted the game altogether. They were in no mental position to win anyway. They wore their warmup shirts inside out, an admirable gesture of unity. But it didn’t go far enough. “Sometimes the severity of the situation supersedes the notion of ‘the show must go on,'” Johnson says. “Forget about all the sanitized statements. Show the ultimate balls. Don’t play the game. No one would have ever blamed them.”

A one-game forfeit would have sent a historic social message: we won’t stand for the racism that even Charlotte Bobcats owner Michael Jordan, who has famously dodged political discourse his entire career, called “sickening.” And the Clippers would have returned to Los Angeles for Game 5 riding a wave of emotion and nationwide admiration for their principled stance. “It was a missed opportunity,” Johnson says. “The timing was just perfect”

At least, Johnson says, the players should have demanded that Sterling meet with them face to face before the game and explain himself. If his apology seemed sincere, they could take to the court with more comfort. If they sensed insincerity, they’d have even more reason to back out. “The players had all the leverage here,” Johnson says. A five-time NBA All-Star who went to UCLA and spent most of his career playing for the Milwaukee Bucks, Johnson says he did not experience any racism from Sterling directly. Johnson remembers the owner’s notorious frugality: during one training camp, Sterling put the team up in a tacky motel. “There was just this pervasive attitude about how he viewed his players,” Johnson says. “He thought of us as property.”

So the racist comments didn’t surprise Johnson, especially since he’s familiar with Sterling’s sordid past. The federal government sued Sterling for refusing to rent apartments to blacks and Latinos; he settled for $2.7 million. Former Clippers executive Elgin Baylor also sued Sterling for racial discrimination, though that claim was eventually dropped.

Now, in his first major test since taking over for David Stern in February, it’s up to new NBA commissioner Adam Silver to come down hard on Sterling. Expect a swift decision, and Silver won’t wilt: unless that tape was somehow doctored — an unlikely story — Sterling will be fined and suspended. Maybe Silver sets Sterling’s banishment from the league in motion.

Such a decision won’t set off much protest. But a Clippers walkout — that would have been remembered forever. 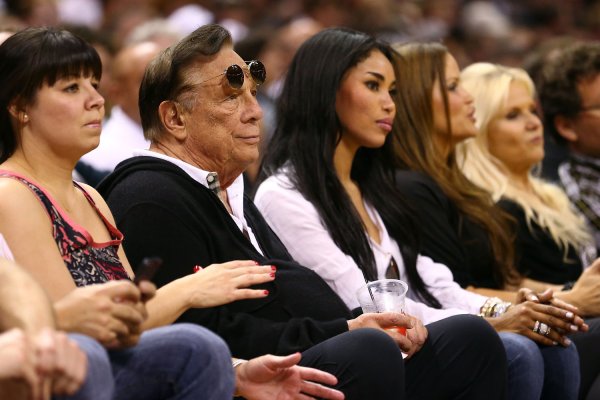 Clippers Owner Under Fire
Next Up: Editor's Pick