Palestinian President Mahmoud Abbas on Sunday called the Holocaust “the most heinous crime” of modern history.

“[W]hat happened to the Jews in the Holocaust is the most heinous crime to have occurred against humanity in the modern era,” Abbas said in a meeting with the American rabbi Marc Schneier, the Associated Press reports. The official Palestinian news agency WAFA quoted Abbas as expressing his “sympathy with the families of the victims and many other innocent people who were killed.”

Abbas’ comments mark a rare acknowledgement by an Arab leader of Jewish suffering during the Nazi-driven genocide of the 1930s and 1940s. His remarks appeared to in part be an attempt to connect with Israelis even as U.S.-orchestrated peace talks appear to be on the verge of collapse.

Abbas’ remarks also come as the Palestinian Liberation Organization, which Abbas leads, arrived at a reconciliation deal last week with Hamas, its political rival. Hamas, which generally refrains from acknowledging the Holocaust, has claimed responsibility for attacks that have killed hundreds of Israelis. The group has controlled the Gaza Strip since 2007.

Israeli President Benjamin Netanyahu, however, dismissed Abbas’ comments. “President Abbas can’t have it both ways. He can’t say the Holocaust is terrible but at the same time embrace those who deny the Holocaust and seek to perpetrate another destruction of the Jewish people,” Netanyahu said in an interview on CNN. 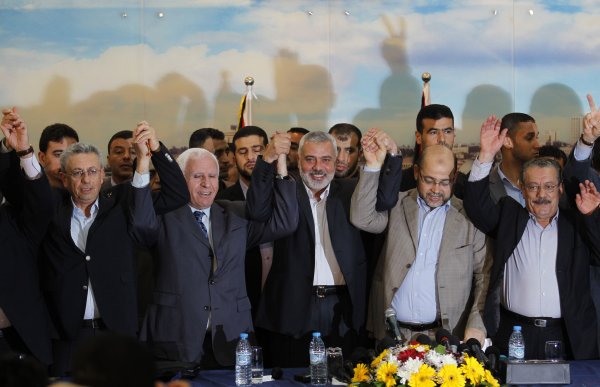