South Korea’s Prime Minister Chung Hong-won has said he is prepared to resign in order to take responsibility for the government’s handling of the Sewol ferry disaster, in which over 300 people have been killed or are missing.

President Park Geun-hye accepted his resignation but asked Chung to remain in office until the government completes its rescue operations.

Fifteen crew members have been arrested and accused of not doing enough to help passengers escape the vessel, which sank on April 16. The captain’s order to evacuate the vessel was allegedly given when it was listing too severely for most passengers to leave. Subsequent investigations have also found that the Sewol may have been overloaded, overcrowded and under the command of an inexperienced junior officer at the time of the tragedy.

“There have been so many varieties of irregularities that have continued in every corner of our society and practices that have gone wrong,” Chung said. “I hope these deep-rooted evils get corrected this time and this kind of accident never happens again.”

He told media in the South Korean capital, Seoul: “As I saw grieving families suffering with the pain of losing their loved ones and the sadness and resentment of the public, I thought I should take all responsibility as Prime Minister.”

Although search teams are battling difficult conditions — including strong currents, poor visibility and freezing water — relatives of the dead or missing passengers have heavily criticized the official response to the disaster. When he visited an operational area near the site of the sunken ferry last week, Chung was booed and his car surrounded. 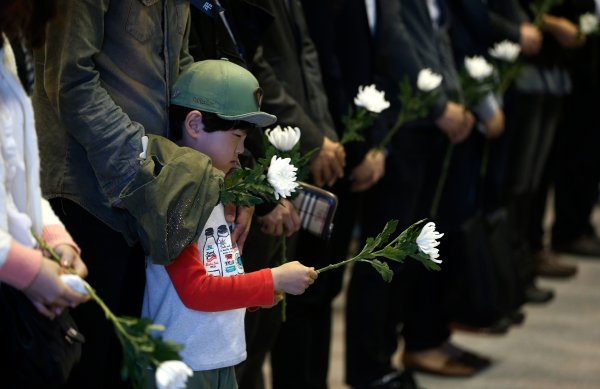 Culture Blaming and Stereotyping in the South Korean Ferry Tragedy
Next Up: Editor's Pick