Zak Penn, director of of an upcoming Xbox original documentary about Atari, and Andrew Reinhard, archaeologist, hold up an Atari 2600 E.T. game cartridges excavated in a New Mexico landfill on April 26, 2014, in Alamogordo, N.M.
Microsoft
By Harry McCracken

Back in May of last year, when Microsoft unveiled its Xbox One console, among the long list of announcements was the news that the company was getting into the business of creating original entertainment programming. But about the only concrete detail it shared at the time was the fact that Steven Spielberg was going to executive-produce a live-action series based on the Xbox’s blockbuster Halo game franchise.

This week, the company is going to have lots more to say on the subject at NewFronts, an event in New York where producers of online video are sharing upcoming shows with the advertising community. I attended a recent preview hosted by two Xbox Entertainment Studios executives with impeccable Hollywood credentials: President Nancy Tellem (the former CEO of CBS Entertainment) and Executive VP Jordan Levin (the former CEO of the WB Network). The duo talked about six “Xbox Originals” projects Microsoft has greenlit, plus another five in development, and showed us trailers for some of them. They also discussed the company’s goal of offering interactive entertainment rather than traditional, sedentary couch-potato stuff.

The main takeaway I got from the sneak peek is that Microsoft is still in the process of figuring out what it wants to do with original programming on Xbox.

I don’t mean that as a slam: Tellem and Levin both kept saying that the effort is in a mode of experimentation. “I’ve been at this long enough to know that you just have to step up to the plate and keep swinging until something connects with the audience,” Tellem said.

Some of the Xbox Originals that are in the works:

Signal to Noise: A series of documentaries about technology’s impact on the world, produced by Simon Chinn (Searching for Sugar Man, Man on a Wire) and Jonathan Chinn. The first one, which chronicles the fall of Atari and focuses on the legendary idea that the company buried unsold E.T. game cartridges in a New Mexico landfill, has already made news: The filmmakers just dug up the cartridges.

Every Street United: Tying into the World Cup in Rio De Janeiro, and debuting this June, this is a reality series involving street-soccer players from around the world, culminating in a match in Rio.

Bonnaroo: Xbox will stream the Tennessee music festival in June, allowing viewers to switch between two stages of live performances.

Humans: Based on a Swedish series and co-produced with the UK’s Channel 4, this is a one-hour drama set in a parallel present in which people have eerily life-like robotic servants.

Extraordinary Believers: A show in development from the creators of Robot Chicken, which inserts silly 3D animated characters who look like they’re from a sword-and-sorcery world into what seems to be unscripted video shot in everyday locations.

In addition, Tellem and Levin played up the idea of turning additional Xbox game franchises such as Forza Motorsport and Gears of War into series or movies, without providing details.

Everything Microsoft is announcing is designed to be a potential hit with typical 18-34-year-old guys who like to play video games: There are no shows about economic policy or wedding dresses or medieval folk music. Still, within that framework, there’s a fair amount of diversity and programming that also might be of interest to those of us who happen not to be 18-to-34-year-old guys. The company seems to be aiming for variety rather than one buzz-generating blockbuster along the lines of Netflix’s House of Cards.

The part of Microsoft’s plans that’s the fuzziest–but that has the greatest possibility of helping it stand out from the streaming video crowd–is the interactivity angle. Tellem and Levin kept talking about how exciting it was, but they didn’t have too much to say about the specifics, other than the ability to choose a Bonnaroo stage, the possible integration of Skype videoconferencing into some shows and a few other general ideas.

That said, Microsoft has one big edge on Netflix, Amazon and other companies that are generating exclusive original entertainment for their streaming services: In the Xbox One, it controls its own powerful hardware platform, with advanced features such as the Kinect 2 sensor. The opportunity to do great, interactive things is there, at least. And if Microsoft makes any of the Xbox Originals interactive in a way that captures the imagination of viewers, it really will be news. It’s just that it’s too early to have an opinion about its chances.

Also still a bit vague: Microsoft’s precise distribution plans. It’s saying that Every Street United will be available on Xbox Video for Xbox One, Xbox 360, Windows and Windows Phone, and that Signal to Noise will be exclusive to Xbox One and Xbox 360. But it’s not yet spelling out which Xbox Originals will require a subscription to the Xbox Live service and which won’t–it sounds like there will be some of each–and whether any will be ad-supported.

I also asked Tellem whether all the episodes of any of the Xbox Originals series might be released in one fell swoop, a la House of Cards. “We’re going to do some experimentation,” she told me. “I’m not against binge viewing by any means. There are some projects which lend themselves to it, and others that don’t.”

The notion of Microsoft taking an active hand in creating TV shows and movies that will be available only on Xbox is new, but its consoles are already major players in streaming entertainment. (Owners already spend more time using their Xboxes to watch video and listen to music than they do playing online games.) Tellem says that the company is going to be patient with this effort: “Microsoft understands the value of content, and that this road is just beginning.” For now it feels like it’s anyone’s guess where it’s going to lead. 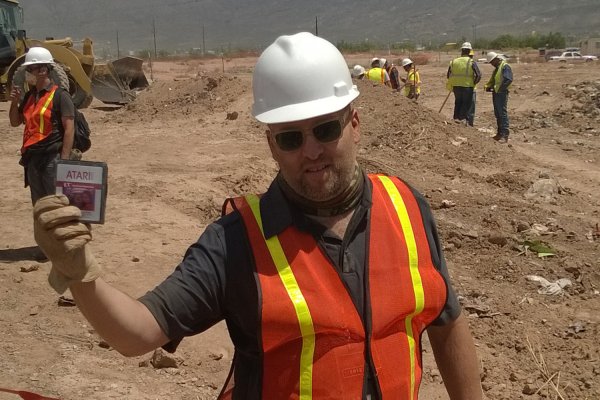 Excavators Dig Up E.T. in New Mexico
Next Up: Editor's Pick