REVIEW: Locke: Trapped in a Car, and Tom Hardy's the Driver

A24
By Richard Corliss

It’s as if some mythical cinema professor has assigned a test to the most ambitious filmmakers: produce a movie with only one on-screen character. Sandra Bullock spends most of Gravity wandering solo above Earth, and in All Is Lost Robert Redford battled the elements in his disabled yacht. Space, the sea — what’s left but a car? Writer-director Steven Knight has built a car with a Locke: Ivan Locke (Tom Hardy), facing several crises as he motors alone on England’s M40. Hardy, the English actor who put his ferocious physicality to thrilling use as the monster Bane to Christian Bale’s Batman in The Dark Knight Rises, must play the whole piece sitting down behind the wheel of his BMW.

For fun, add another degree of difficulty, as J.C. Chandor did in All Is Lost by giving the Redford figure no name, family or emotional backstory. In Locke — a well-executed trick performed by one of the most powerful and protean actors in movies — the story plays out in just over 80 mins., or about the time it takes Ivan to drive from Birmingham to London.

(READ: Richard Corliss on Tom Hardy as Bane in The Dark Knight Rises)

Actually, Knight cheats a bit. To make the 100-mi. trip, Locke would have to be driving a consistent 80 mph; and with cars frequently passing him, he looks to be doing about 40. But only the bored would be holding a stopwatch against the movie, which hands Ivan, a construction foreman, three monumental tasks that might exhaust Hercules. We soon learn that Locke cheats a bit too: he is making the trip in order to be with Bethan (voiced by Olivia Colman, who played Margaret Thatcher’s daughter in The Iron Lady), a lonely woman and, for Locke, a one-night stand, who is about to give birth to his child.

So as he tools down to London, he must calm Bethan’s pre-partum anxieties. He has to inform his wife Katrina (Ruth Wilson, Colin Farrell’s wife in Saving M. Banks) of his infidelity and shoulder the consequences. And he must try supervising, by remote control, the pouring of concrete for a huge building project, which he was to handle in person early the next morning. Plus he has a cold. The tissues and a bottle of medicine are the only props, apart from the steering wheel, that Hardy has to work with.

Ivan is literally and metaphorically isolated, but not lacking for conversation. His dashboard Bluetooth transmits dozens of phone calls, to and from Katrina and their young sons, Bethan and the hospital staff and Ivan’s construction aide Donal (Andrew Scott, who plays Jim Moriarty on BBC’s Sherlock series). Although Locke’s bosses fire him, furious that he has gone AWOL on the eve of “the biggest pour in Europe,” he feels morally obliged to oversee every detail, including a few on-the-spot disasters, from his car phone. The same with Bethan, a woman who is “quite old, 43 or something,” unattractive and with no purchase on his heart: he refuses to tell her he loves her, because he doesn’t, and Locke is one fearless truth-teller — except to his wife, on the little matter of the affair and pregnancy.

One person alone on the phone: Jean Cocteau did that with his one-act play The Human Voice, which gave the Italian diva Anna Magnani a splendid role in the 1948 film version directed by Roberto Rossellini. This is a stunt, no question, and the main fascination with Locke is how it will keep viewers intrigued once they figure out the very restrictive ground rules. Visually, the film is pedestrian. It appraises Hardy, mostly in medium closeup, from five angles, 45 degrees apart, around the front seat. When Ivan gets a call we see the Bluetooth in front of him; when other cars throw vague lights against the windshield, he looks like a ghost in the machine. Whereas All Is Lost gave no hint of its protagonist’s life before he got on screen, Locke covers all of Ivan’s life, from his angry youth as the son of a man who ignored him (and whom Ivan invokes as an invisible passenger in the back seat) to his sons’ obsession with a soccer match being televised while he drives.

(READ: Mary Corliss’s review of All Is Lost)

Knight, who wrote the excellent screenplays for Stephen Frears’ Dirty Pretty Things and David Cronenberg’s Eastern Promises, both dealing with the London crime scene, wants us to see Ivan as an icon of probity, and perhaps a tragic hero. In his 15 years of marriage, he has strayed only this once, a victim of circumstance (his solitude, some liquor) and pity for Bethan. He works to give his sons the love and attention his father never lavished on him. Though he won’t speak warm words to the woman who is bearing his child, he resolves to give that child his name.

And everyone in the business says he’s a hell of a builder. He refers to the 55-story tower as “my building,” even as the child is to be his baby; and his wife, who’s ready to throw him out, says, “You’re more in love with your buildings anyway. Why don’t you go live in one of them, right at the top?” Ivan might be a modern descendant of Halvard Solness in Henrik Ibsen’s play The Master Builder, who strives to reconcile work and family even after he meets a woman he made sexual advances upon long ago. “I will do what I must,” Ivan says, “if they hate me or love me.” That’s the rule he lives by — the key to Locke’s myth.

Knight sometimes moseys toward the edge of plausibility in this one-man show, but since Hardy is the one man, Locke never lacks rooting interest. A virtuoso of rage in other movies, he reigns it in here: just a few shouted obscenities when something goes dreadfully wrong. And though Ivan is penitent in most of his phone chats, Hardy speaks in the soothing, almost musical tones of a Midlands confessor. The third-act tears he sheds, as son Eddie (Tom Holland, the lost boy in The Impossible) rhapsodizes about the hometown football victory, are easy to see coming but nonetheless affecting.

You could say that Hardy’s performance is also a trick: confining himself to the middle range of emotions as he sits in a car with no other actors’ faces to play to. But it’s the reason you’d see Locke, and the reason you may remember it fondly, long after the ride ends. 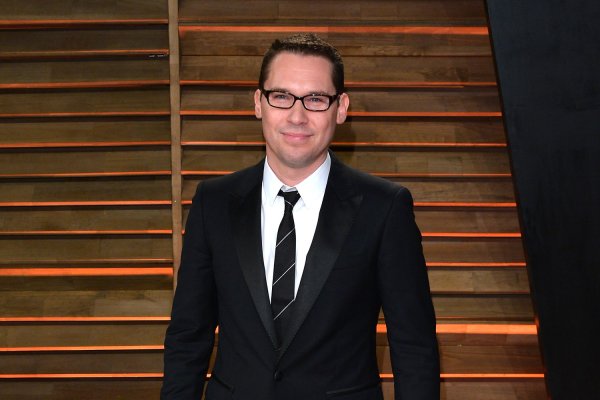