1812: The War No One Wants to Commemorate

Selling the burning of Washington to Washingtonians turns out to be not so easy.

This summer marks the 200th anniversary of the War of 1812. Why, one might ask, is a war that began in Canada in 1812 and ended in 1815 in New Orleans being celebrated in Washington D.C. in 2014? “Although it seems rather morbid to celebrate the burning of Washington in the summer of 1814, it was the turning point of the war. It was the force that pushed the American side to really come out and push for the victory that culminated in the battle of New Orleans with Andrew Jackson a few months later,” says Leslie Jones, public programs manager at the National Center for White House History at Decatur House, one of a dozen organizations organizing events marking the anniversary.

But even though the U.S. won it, the War of 1812 seems to be the buck-toothed stepsister of American military victories. Jones and a small battalion of historians and curators are all very eager to talk about the important milestones of America’s second war of independence—Dolley Madison saving George Washington’s portrait from the White House fire; the brave, tiny militia of Washingtonians who tried to defend the city; Francis Scott Key’s ode to the Battle of Fort McHenry, otherwise known as the Star Spangled Banner — but despite their best efforts, there seems to be little interest thus far in marking the bicentennial.

Other historical anniversaries have fared better. The bicentennial of the American Revolution, for example, saw nearly a decade of celebrations that encompassed televised fireworks, concerts, speeches, nautical and ticker tape parades and a yearlong exhibit at the Smithsonian. It was the theme of Superbowl X as well as two American bids for the Olympics. The original planned name for the first space shuttle was Constitution, in honor of the 200th anniversary of the signing of the founding document, but that was before NASA engineers got carried away by Star Trek and switched the name to Enterprise.

The 150th anniversary of the Civil War that started last year saw the Steven Spielberg biopic Lincoln, a spate of books including Rise to Greatness by my colleague David Von Drehle, a History Channel series, an exhibit of Abraham Lincoln’s papers at the Library of Congress and more battle reenactments than can be counted.

Compared to all that, the celebrations for the War of 1812 seem modest indeed. On Flag Day on June 14, the Smithsonian will hold a concert and will display the U.S. flag that inspired Key to pen the nation’s anthem during the war. The annual July 4 Independence Day celebration of the National Mall will be 1812 themed.

But you’ll need to look hard for more events around the nation. Washington, Virginia and Maryland museums and landmarks will hold a “Muster the Militias” open house weekend on July 25-26 featuring free admissions, special tours and family programs. Bladensburg, Md. will unveil a monument commemorating that pivotal battle. Alexandria, Va. will hold a commemorative weekend of events, and the White House Historical Association will hold a day-and-a-half symposium entitled “America Under Fire.”

Aug. 24, the actual day of the 200th anniversary of the burning of the Capitol, will be celebrated in Washington with little more than a 5k run at the Historic Congressional Cemetery, a family festival in Georgetown and a beer festival at Yards Park. The only sponsors signed on thus far are the British, Belgian and Canadian Embassies, WAMU radio and On Tap Magazine, who is sponsoring the beer festival. However, there are cool commemorative stamps and coins to collect.

So why the relative lack of enthusiasm about 1812? Maybe because the U.S. is now best friends with the aggressor, Great Britain. But that didn’t seem to generate any awkwardness during the Revolutionary War bicentennial, when Queen Elizabeth was happy to visit to join in the celebrations. More likely, say some historians, it’s simply a lack of awareness.

“This is an area of history that is so not well known by the broader American public,” says Karen Daly, executive director of Dumbarton House, an historic Washington property that is now a museum. “I find when people visit Dumbarton House, an incredible number of Americans don’t even know this event even happened. They tend to jump from the Revolutionary War to the Civil War. This area of history is glossed over in our schooling. And yet, this is what gave us our national anthem and it is very much the event that cemented the union and the democracy. It’s an incredible piece of our history.”

So come on America, have some pride for the 1812 War! We actually won this one. 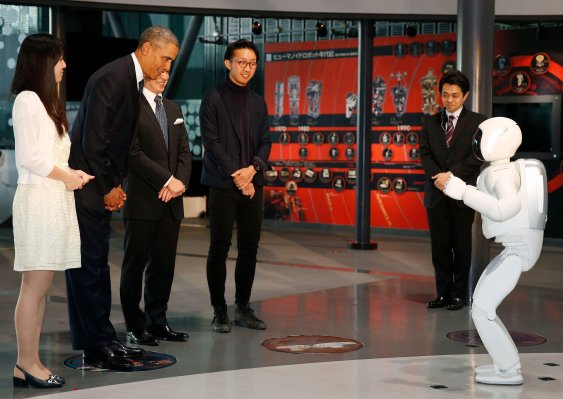 Obama Bows to Robot in Japan
Next Up: Editor's Pick