Girls are doing two more hours worth of chores than boys are, while boys are spending twice as much time playing than girls do, according to a study from the University of Michigan’s Institute for Social Research. And yet, boys are 15 percent more likely to get paid for doing the chores they do take on. Another new survey from Junior Achievement USA and the Allstate Foundation points to the same trend: 70 percent of boys get an allowance, compared to only 60 percent of girls.

The most damning survey comes from Westpac, which found that boys earned an average of $48 for spending 2.1 hours on chores per week, while girls only got $45 for working for 2.7 hours on household jobs.

Before we dismiss these studies as cute—after all, we’re talking about money used to buy toys and candy—remember that this system reinforces the expectation that females won’t be paid as much as males for equal work, even at a young age. This could help explain why women earn less than men in all but 7 of of the nearly 600 occupations listed by the Bureau of Labor Statistics. (A female physician, for example, earns 67 percent of her male counterpart’s paycheck.) Even when you remove factors like women taking time off or working part-time to raise children, an analysis by the Government Accountability Office found that women still earn around 80 percent of men’s wages.

This chore pay gap also demonstrates to girls that household work doesn’t count as work that should be rewarded. It’s no wonder then that when they grow up, women spend more than twice as much time on unpaid work (like childcare and household chores) as men do each week, while men find more time to relax.

These findings suggest that we’re still stuck in a system that discriminates against women and are still too far away from equal pay goals.

Some have argued that the pay gap is the result of women choosing lower-paying jobs like teaching and social work over higher-paying jobs like engineering. But some researchers argue that’s simply not the case. A recent study by a Harvard labor economist traced the source of the pay gap. As Claire Cain Miller wrote of the data in this Wednesday’s New York Times:

Goldin’s solution? More flexible hours and locations, according the paper she published this month in the American Economic Review.

It’s a solution we’ve known for a long time. A friend and I watched the 1980 Jane Fonda comedy Nine to Five for the first time last night, in which three women secretly take over the office management from their sexist boss. They put in place a flexible hour program, a daycare center and equal pay—all office programs that working women desperately want and need—making all the employees happier and more efficient. Corporate praises the changes, though they bristle under the equal pay and revoke it. The movie ends with the three women opening a bottle of champagne and celebrating their achievements. When one comments that they still didn’t get equal pay, another responds that this is just the beginning and they’ll get there.

Thirty-four years later, we’re astonishingly still not there: Republicans voted down the equal pay bill this month, citing the explanation of diverging professional preferences between men and women. The reason we’ve fallen short of implementing the changes we knew we needed to make 34 years ago could be rooted in what we teach our children: that men and women don’t need to be paid equally and that the extra burdens women take on at home are not worthwhile. Changing that will mean that both mothers and fathers will have to think about whether they’re creating a junior gender pay gap at home. 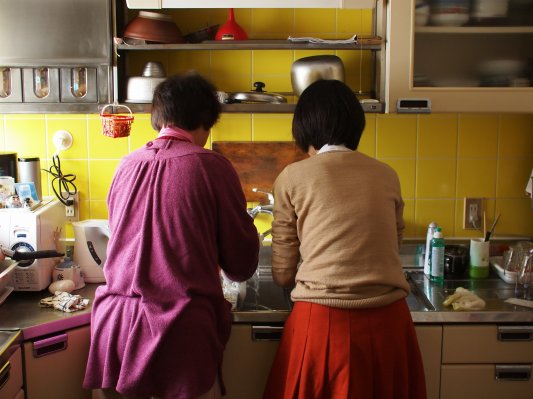 6 Insulting Terms for Adults Who Live With Their Parents
Next Up: Editor's Pick