Question Bridge: Black Males is an innovative transmedia art project that aims to facilitate a dialog between black men from diverse and contending backgrounds and create a platform for representing and redefining black male identity. Conceptual artist Hank Willis Thomas writes for LightBox about the ideas and motivations behind the project.

Living in mainstream society in the 21st century — a critical period in American history — requires us to constantly challenge and modify our behaviors, values and ideas about long-standing norms. In recent years, many people from traditionally marginalized communities have been able to transcend gender, cultural, racial, and economic boundaries, while others — African American men, in particular — have found themselves increasingly burdened with institutional constraints. Even with Barack Obama in the White House, many black men are still racially profiled; they are severely overrepresented in prisons; they suffer disproportionately from various preventable health risks and violent crimes. Even more disheartening is the level to which they are over-disciplined in the criminal justice system for the same offenses compared to “whites” convicted of similar crimes.

Question Bridge was conceived by my collaborator, Chris Johnson, in 1996. Chris felt that art is “too often considered to be something that can be valuable without being useful.” The purpose of a Question Bridge is to use art to create a safe setting for honest expression, healing dialog and understanding within a community.

Over the past five years, Chris and I, along with Bayeté Ross Smith, Kamal Sinclair, Jesse Williams and a growing team of artists have traveled the country and video-recorded nearly 1500 questions-and answer-exchanges from 160 self-identifying black men. We have created a video art installation that is traveling the country, a youth development curriculum and specialized community engagement events. We are currently developing an interactive website, a book and accompanying documentary. The project aims to spark a paradigm shift in consciousness around black identity that removes two critical obstacles facing the modern black male: exclusion from “the other” and estrangement from each other.

A sample question from the project.

There is as much diversity within any demographic as there is outside of it. Why should anyone be confined to another’s definition of who they are? The craziest thing about “blackness” is that “black people” didn’t create it. Europeans, with a commercial interest in creating a sub- or nonhuman order of being that could be traded as a commodity, fabricated the concept of a “black race.” Nearly every virtue or characteristic ordinarily ascribed to human beings was stripped away as justification for the trans-Atlantic slave trade. The residue of this ancient mythology continues to corrode our discourse. Africa is a huge continent with hundreds of millions of souls, thousands of religions, histories, languages and cultures. Could such a galaxy of existences be reduced to a single, simple word? The persistent struggle for generations of Americans of African descent has been to turn a concept designed to relegate and regulate us into something beautiful and laudable. Millions have succeeded, but even more still fight the battle against implicit bias.

The depiction of black males through popular culture has long been governed by prevailing stereotypes about race and sexuality. Far too little is known about the range of internal values and dynamics of this group. Thousands of scientists, social scientists, theorists, historians, politicians and activists have investigated the “plight” of the African American male on various levels and from diverse perspectives, yet not enough has been done to create and find a multifaceted and, critically, a self-determined representation of this demographic. In some ways, the black male’s greatest challenges reside within himself, and between other black men. The question is, “why?”

Question Bridge: Black Males opens a window onto the complex and often invisible dialogs among African American men. “Blackness” ceases to be a simple, monochromatic concept, while the project urges the participants themselves to be at once the researchers and the subjects. Thus, not only the participants but the project’s witnesses are freed to recognize each black man as an individual with limitless potential, released from the constraints of low-expectation stereotypes

Ultimately, however, in a very real sense, the project is not about black men at all. It’s about what happens when people are put into groups, how they relate to the idea of the group and to others within it. This is a human experience. We live in a moment where we are outgrowing authoritative, grand narratives written by our “leaders.” Nearly every boundary has become permeable. We have a greater understanding of the value of each of our voices and the importance of listening to a variety of perspectives before forming our own conclusion about a given issue. Our greatest hope for this project is to complicate any simple definition of a group to the point where people no longer feel comfortable saying “black men are…” If we are successful in this broad endeavor, then we believe the Question Bridge methodology can be replicated and applied to address a broad range of human issues. This is only the beginning. 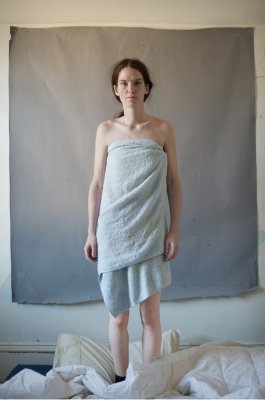 Live Through This: Documenting One Woman’s Struggle with Heroin
Next Up: Editor's Pick