There was a time when the Oklahoma court system settled internal disputes far more privately than the way things played out this week, when a legal appeal from two death row inmates ignited a messy public fight among two state courts, the attorney general and the governor. In those days, according to longtime court watchers, disagreements between the Oklahoma Supreme Court and the state’s Court of Criminal Appeals were often resolved far away from prying eyes — inside a courthouse men’s room.

“The chief justice of the Oklahoma Supreme Court and the chief judge of the court of appeals would confer in the men’s bathroom because it was halfway between them,” says Stephen Jones, a prominent Oklahoma attorney who defended Oklahoma City bomber Timothy McVeigh. “It was a toilet conference.”

Tales of those lavatory pow-wows may be inflated, but it is certain that the two courts could have used a similarly private conference after finding themselves locked in a a constitutional turf war over a state law protecting the anonymity of lethal injection drug suppliers. A challenge to the law from two condemned prisoners set off a bitter feud between the state’s highest court, its criminal appellate division, Oklahoma’s top law enforcement officer and its chief executive. Hanging in the balance was the fate of the two men — and the potential to set a national precedent in the increasingly tangled question over how the United States executes its condemned.

The roots of the dispute date to 2011, when most pharmaceutical companies stopped selling drugs to states for use in lethal injection. In response, Oklahoma and several other states passed laws providing drugmakers anonymity in an effort to protect them against protests or boycotts if word leaked that their drugs were being used in executions. As supplies from known drug companies dwindled, these states turned to compounding pharmacies, which are not regulated by the federal government, for their lethal drugs. Human rights activists have said that unregulated pharmacies risk turning out contaminated batches of drugs, which could cause pain and distress during executions, violating the Constitution’s protections against cruel and unusual punishment.

The use of compounding pharmacies and untested drug combinations in lethal injections has led to a series of legal challenges from condemned inmates and human rights groups. In January 2014, convicted murderers Clayton Lockett and Charles Warner sued the state on the grounds that they had a right to know the source of the drugs that would be used to kill them and to be assured that their deaths would not be cruel and unusual. In March, an Oklahoma district judge agreed with them, finding the secrecy law unconstitutional and transferring a stay of execution request to the Court of Criminal Appeals. The appeals court refused to grant a stay — and that’s when things started to run off the rails.

Attorneys for Lockett and Warner appealed to the state Supreme Court, which issued its own stay of execution in a 5-4 ruling. The court’s rationale was that a stay was necessary in order to have time to decide the pending lethal injection secrecy case. But to the state’s attorney general and governor, the high court’s ruling was nothing short of a power grab.

Scott Pruitt, the attorney general, called the situation a “constitutional crisis” and said the Supreme Court had no right to overrule the appellate court because the two bodies were co-equal branches of the judiciary. It was an opinion shared by Supreme Court Justice Steven Taylor, who in the minority’s dissent to the stay ruling wrote: “We have never been here before and we have no jurisdiction to be here now.”

According to legal experts, the state’s Constitution allows the Supreme Court to determine which court has jurisdiction in the face of a conflict — a power it exercised in granting the stay of execution. But that debate was further clouded on April 22, when Oklahoma Governor Mary Fallin issued an executive order overriding the Supreme Court’s indefinite stay while issuing her own seven-day stay of execution. Whatever clarity there was suddenly disappeared.

“I don’t think there’s any question she can issue a stay of execution,” says Andrew Coats, dean of the University of Oklahoma law school. “But it’s unclear whether she can override the Supreme Court.”

Before the dueling orders could be resolved, the Supreme Court acted to end the impasse, ruling on April 23 that the secrecy law is constitutional. The decision paved the way for Lockett and Warner to be executed on April 29 using a combination of midazolam (for pain relief), vecuronium bromide (as a paralytic), and potassium chloride (to stop the heart). The combination is one of five lethal injection protocols allowed under state law, though Oklahoma has never used it before. Florida is the state to have used the combination and there were no observable problems with the execution.

While the legal question is resolved, the sparring continues. To Jones and other observers, Fallin’s maneuver had little to do with the law, and everything to do with politics. In 2010, the state GOP gained control of the executive and legislative branches. But six of the state’s nine Supreme Court judges were appointed by Fallin’s predecessor Brad Henry, a Democrat. In the last few years, a number of Republican-sponsored bills involving abortion, gay marriage and tort reform have been struck down by the court.

“In my view, there’s a perception that the judiciary is the last Democratic party institution,” says Daniel Boudreau, a former Oklahoma Supreme Court justice. “The view among the conservatives in Oklahoma, I believe, is that the institution is too liberal.”

On Wednesday, Republican state Rep. Mike Christian drafted a resolution calling for the impeachment of the five justices that granted stays of execution for Lockett and Warner, telling the Associated Press that the judges’ actions showed a “willful neglect of duty.”

Fallin’s office said the governor was unavailable for comment.

Meanwhile, the Supreme Court’s final ruling could help establish legal precedent around the nation. About a dozen states have laws or bills pending shielding the identity of lethal drug suppliers drugmakers — and many of them are being challenged in court.

“We believe knowing the source of these drugs is vitally important to know if extreme pain or suffering is occurring,” says Susanna Gattoni, a lawyer representing Lockett and Warner. “We shouldn’t want our government imposing the most severe penalty under secrecy, but that’s what’s happening.”

The Oklahoma ruling followed a convoluted path. But the final result could make getting those answers harder than ever. 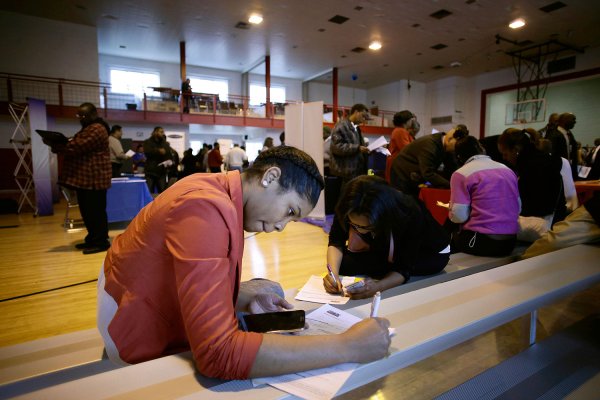 Poll: Americans More Optimistic About Jobs
Next Up: Editor's Pick