Clashes in Eastern Ukraine Kill Up to 5 Separatists

Up to five pro-Russian separatists were killed in an operation against rebels in eastern Ukraine, Ukraine’s Internior Ministry said Thursday.

A Ministry statement said that “up to five terrorists were eliminated” as Ukrainian forces removed three rebel checkpoints in the separatist-held city of Slavyansk, Reuters reports. The statement said one member of the government’s forces was wounded in the fighting.

However, a rebel spokesperson said earlier that only two fighters were killed in the clashes.

The deaths are the first since interim Ukrainian President Oleksandr Turchynov ordered Tuesday the resumption of operations against separatist forces in eastern Ukraine.

International parties agreed last week to a joint roadmap to ease tensions in eastern Ukraine. However, pro-Russian separatists in eastern Ukraine have so far defied the agreement’s stipulation that they disarm. U.S. President Barack Obama said Thursday Russia was failing to live up to “the spirit or the letter” of the agreement. 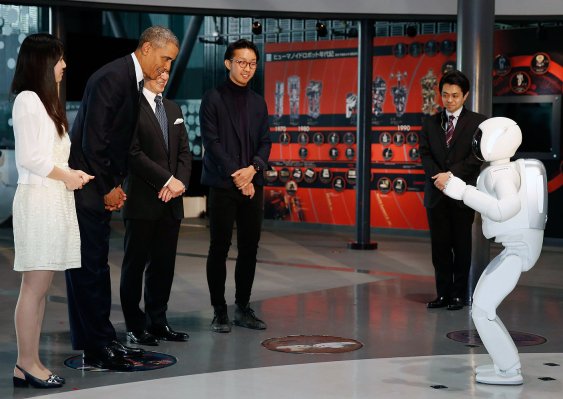 Obama Bows to Robot in Tokyo
Next Up: Editor's Pick