Pineda was ejected from Wednesday’s game at Fenway Park, which the Yankees ultimately lost 5-1, and a suspension from Major League Baseball was largely expected.

In an usual turn of events, Pineda actually confessed to the crime — not that his guilt wasn’t apparent — and explained that he wasn’t trying to cheat, but rather that he was trying to get a better grip on the ball so as not to unintentionally hit any batters: “It was a really cold night and in the first inning I (couldn’t) feel the ball,” he said. “I don’t want to like hit anybody so I decided to use it.”

The umpires’ discovery came after Red Sox manager John Farrell asked that they checked the 25-year-old pitcher for an illegal substance. The ejection comes just two weeks after rumors swirled that Pineda had placed a foreign substance on his pitching hand during an April 10 game also against Boston.

There’s much debate in the baseball world about whether pine tar and other grip-enhancing substances should be banned, and it’s no secret that their use is widespread in the sport — Pineda’s mistake was making the infraction so obvious.

Pineda faces a likely suspension, another blow to a weakened Yankees pitching staff that will likely lose Ivan Nova to elbow surgery. 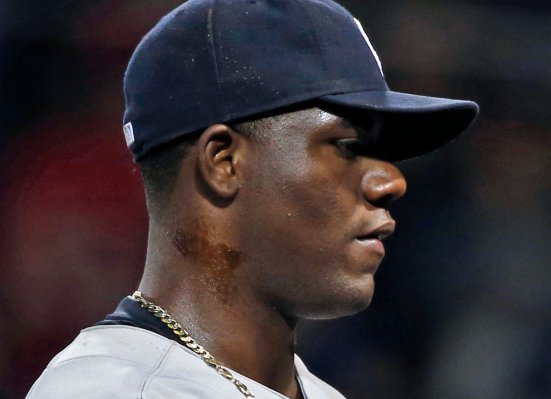