Chelsea Manning: Not the Only Military Name Change

A Kansas judge on Wednesday allowed Bradley Manning to change the imprisoned Army private’s name to Chelsea Manning. “It’s a far better, richer, and more honest reflection of who I am and always have been—a woman named Chelsea,” Manning said in a statement on ChelseaManning.org.

The name change shouldn’t come as a surprise to anyone who has spent time in or around the U.S. military. The Department of Defense has been known to erase one name in favor of another when it has suited its purposes—and it didn’t need a judge’s approval to do it.

The Army said Leavenworth County District Judge David King‘s ruling is “only a name change” and won’t change Manning’s status. Manning is serving a 35-year sentence at the Army’s all-male Leavenworth Disciplinary Barracks in Kansas, for leaking 700,000 classified documents to Wikileaks before his arrest in Iraq in 2010.

War has always had, not to put to fine a point on it, a specific and violent meaning. With the end of World War II—and the beginning of the Cold War—the U.S. government found itself needing a standing Army for the first time in its history. Replacing War with Defense made the change more palatable.

The Pentagon tends to embrace words that make war seem antiseptic: exploding bullets, bombs and missiles have become kinetic, which is the Pentagon’s preferred way of saying bloody. “When you fire a kinetic weapon, it blows something up—you can see the effect,” Mark Lewellyn of the Johns Hopkins Applied Physics Laboratory, explained to Congress last year. “With some of the non-kinetic weapons you don’t really know what effect you’ve had until either the weapon from the other side doesn’t show up or it misbehaves.” Non-kinetic weapons include forms of electronic warfare that disable while not destroying (at least in a physical sense).

Along the same lines, over the past generation, civilian casualties have become collateral damage. When the Obama Administration was weighing military action against Syria last year for its alleged use of chemical weapons, a congressman voiced concern that “the possibility of civilian casualties could be very great” to Army General Martin Dempsey, chairman of the Joint Chiefs of Staff. “Well,” Dempsey responded, “the targeting requirements actually, as given to me by the president, require us to achieve a collateral damage estimate of low.” Doesn’t hurt quite as much, rhetorically, when stated like that.

In 2010, the Pentagon opted to replace the term Psychological Operations with Military Information Support Operations, which went over like lead leaflets for the psyop troops charged with airdropping them on Afghans and Iraqis far below. But psyops—with its connotations of deception and other black arts—was deemed so tainted that U.S. commanders were leery of working with its proponents.

“Although PSYOP activities rely on truthful information, credibly conveyed, the term ‘PSYOP’ tends to connote propaganda, manipulation, brainwashing and deceit,” Defense Secretary Robert Gates wrote in 2010, according to the National Journal. “As a result, a wide range of military-information related activities and capabilities have become tarnished by the term.”

“The pain,” Carlin said of the changing nomenclature, “is completely buried under jargon.” 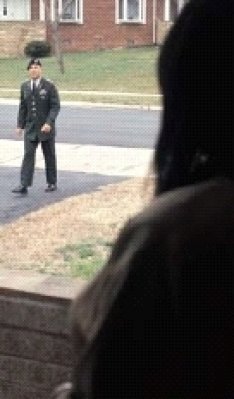 Changes Come in Training Troops to Notify Families of Military Deaths
Next Up: Editor's Pick