This is the beautiful story of how the Tinder creepers who begin their courtship with lines like “Your boobs are even nicer than my mom’s” learned that objectification is a two-way street.

After a few months of online dating, artist Anna Gensler quickly found out that the typical, 20-something, single gal Tinder experience largely consists of combing through inboxes full of blatant and often anatomically complicated requests. But rather than allow herself to become desensitized to the messages, she decided to capture this unacceptable socially acceptable phenomenon in a way that the world (and her potential suitors) could see.

And so, Gensler started drawing her creepers naked and posting them on (NSFW) Instagram. Gensler told Slate that her drawings are “all based off of these guys’ profile pictures, so their faces and their general positions are the same, but from there I tried to make them look a little chubbier or scrawnier or just not particularly well-endowed.”

Although she did warn potential matches on Tinder and OKCupid that she would draw them naked and post the pictures on the Internet if they sent her a rude message, suitors were undeterred. “I feel like the guys who are really creepy don’t even bother to read my profile at all,” she told Slate. “They’re just like, ‘This girl has two arms and two legs.'” 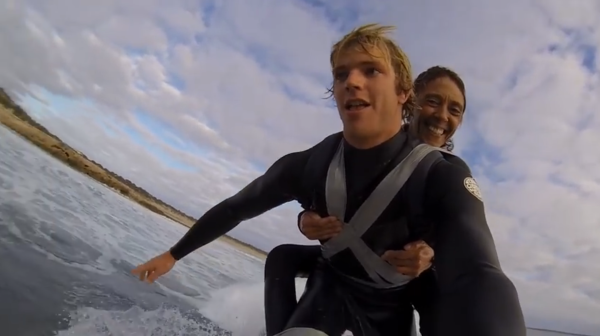 Paralyzed Woman Goes Surfing Thanks To Duct Tape
Next Up: Editor's Pick