A man weeps after tribute at a group memorial altar for victims of sunken passengers ship at the Ansan Olympic Memorial Hall on April 23, 2014 in Ansan, South Korea.
Chung Sung-Jun—Getty Images
By Per Liljas

Praise has poured in for three crew members who sacrificed their lives trying to help passengers to safety while the Sewol ferry sunk last Wednesday off the coast of South Korea.

Park Ji-young, a 22-year-old part-time ferry employee, reportedly helped passengers escape and tended to the injured. Survivors said that she refused to leave the ship while there were still passengers to be rescued.

“She was so responsible and so kind,” Park’s grandmother Choi Sun Dok told CNN at a funeral home in the city of Incheon, near the capital Seoul. Floral tributes have been sent from all over the country. One read “We will not forget your noble spirit.”

At another funeral home in Incheon, a Sewol survivor recounted the bravery of crew member Kim Ki-woong, 28, and his fiancée, Jeong Hyun-seon, 27, who also worked on the ferry. As the ship was sinking, they were yelling to passengers to get out. “Then, the couple went back to the cabins to save other passengers, and they never came back,” he said, according to Korea Times.

Over 31,000 people have signed an online petition calling for compensation for their families and for the three to be buried at the national cemetery.

Meanwhile, divers have taken advantage of slowing currents in their mission to recover bodies from inside the wreck. The death toll has now reached 159, with 143 still missing passengers feared dead. Some 50 civilian divers have joined professional rescuers, while dozens of boats and aircraft are searching for any bodies that may have surfaced. The search is getting increasingly difficult, as divers now have to break through cabin doors to reach additional victims and a search of the 3rd and 4th decks revealed no air pockets where survivors might have been awaiting rescue.

Investigators are still trying to understand the cause of the tragedy, but the Ministry of Oceans and Fisheries suspects that the vessel suffered a brief power outage only minutes before making a 45-degree turn, which it says could have caused the Sewol to list.

Several former crew members have told South Korean media that the 20-year-old ferry, which had an extra deck added after it was acquired in 2012, had stability issues.The crew also spoke of steering problems only two weeks before the incident. The owners of the Sewol have been barred from leaving the country and their residence and offices have been raided.

Eleven rescued crew members, including the captain, have been arrested. An engineer has told investigators that they escaped using passages only accessible by staff, while other crew members have said that passengers were not told to abandon ship before the crew members escaped. 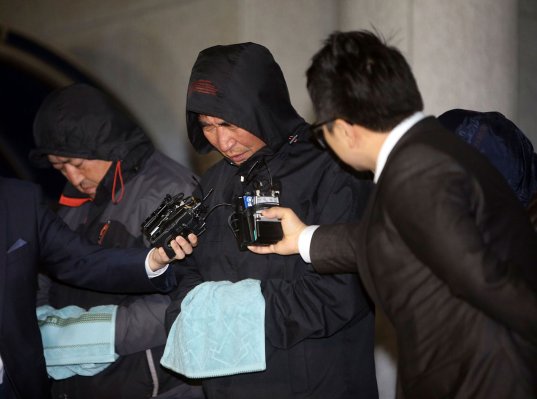 Yes, It's Illegal for a Captain to Abandon Ship in S. Korea
Next Up: Editor's Pick