For the Christian militias in the Central African Republic, it is the time for revenge. Since last fall, the groups — called anti-balaka, or antimachete, in the Sango language — have been hunting down members of the mainly Muslim rebels who toppled the government in March and then went on a violent rampage for much of the year. The rebels, known as Seleka, targeted mainly Christians and continued their pillaging and killing even after their leader, Michel Djotodia, dissolved the group in September. On Jan. 23, days after Djotodia resigned as President, Catherine Samba-Panza, the then mayor of the capital, Bangui, took over as interim President.

Samba-Panza seemed like a figure of hope for a country that has seen five coups since it gained independence from France in 1960 — but the violence has intensified, and the hunters have become the hunted. As the anti-balaka have sought to kill remaining Seleka, the bloody payback has increasingly taken on the characteristics of a purge fueled by religious hatred. Anti-balaka have tortured and killed Muslims who had no ties to Seleka.

The country has very little history of violence between Christians and Muslims, but a growing sense of dispossession in the Muslim stronghold of the northeast led some Muslims there to form Seleka. Once the bloodletting started, anger quickly grew between the Muslim and Christian communities.

Almost 1 million of the landlocked country’s 4.6 million people have fled their homes because of the violence, and at least 2,000 people have been killed in the past 11 months. In December, in a bid to end the conflict, France sent 1,600 peacekeeping troops to its former colony under a U.N. mandate. The French Defense Minister said on Feb. 6 that the U.N. would likely have to renew the mandate so the troops can stay past May. The African Union has also deployed over 5,000 troops there.

French photographer William Daniels arrived in Bangui on Jan. 21 and spent part of the next two weeks on assignment for TIME. “You don’t meet many people telling you, ‘No, it’s O.K., I’m sure we can find a solution to be together later,'” he says. “I don’t see that much hope.” During his trip, Daniels encountered some examples of immense courage, including a priest who was providing shelter to Muslims in his church, but he also noticed an undercurrent of suspicion that bodes ill for the desperately poor country. “We don’t want to attack the Muslim civilians — we just want to attack the Seleka,” one anti-balaka fighter told Daniels. Then, in the next breath, the man added a menacing qualification: “All Muslims are Seleka anyway.” 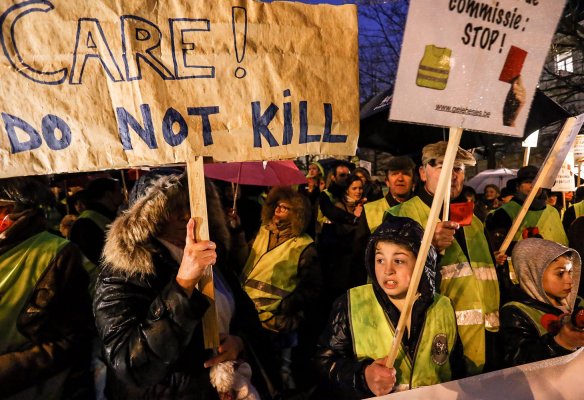 Belgium Extends Euthanasia Law to Kids
Next Up: Editor's Pick