Nicki Minaj Has a Few Complaints About Disappointing Dudes

Nicki Minaj has harnessed the concept of balance like few artists before her: it’s a major part of her success in every imaginable realm, from music to merchandising to the cultivation of her persona. She’s a pure pop star who crashes the charts and pals around with toddlers on The Ellen DeGeneres Show; simultaneously, she’s a ferocious, obscenely talented MC who makes a habit of chewing up and spitting out rappers crazy enough to let her drop the hammer on a guest verse. When interacting with her fans — a massive community affectionately termed “Barbz” — she has a gift for allowing them into her life while maintaining a regal distance, simultaneously inviting identification and aspiration. New single “Lookin Ass Nigga,” cut from a studio album due out later this year that might be called The Pink Print (a reference to Jay Z’s 2001 classic The Blueprint), finds Minaj tilting all the way toward one end of her internal spectrum — it’s a no-holds-barred attack on lame dudes, complete with double assault rifles.

“Lookin” is a remarkable display of personality: when Minaj turns her gaze to the camera, a single arched eyebrow or touch of her hair conveys a powerful disdain that seeps into your skin. When gestures packing that much force are coupled to wickedly spat put-downs and punch-lines, it’s fearsome to behold. The message is clear: this is not someone to trifle with. If the song is a sign of things to come from Minaj in 2014, we’re in for an exciting year. 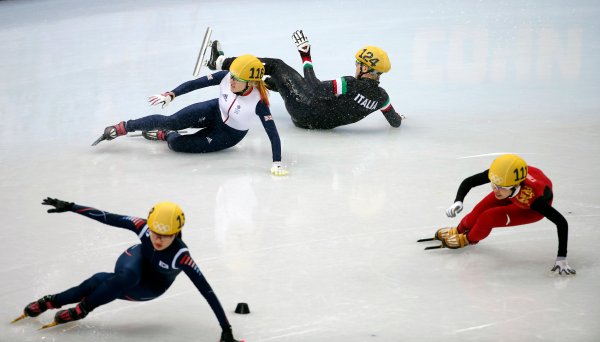 Incredible Images from Day 8 of the Sochi Olympics
Next Up: Editor's Pick